Larry Kudlow whines after CNN's Harlow fact-checks him in real time: ‘I resent your little nitpicking’ 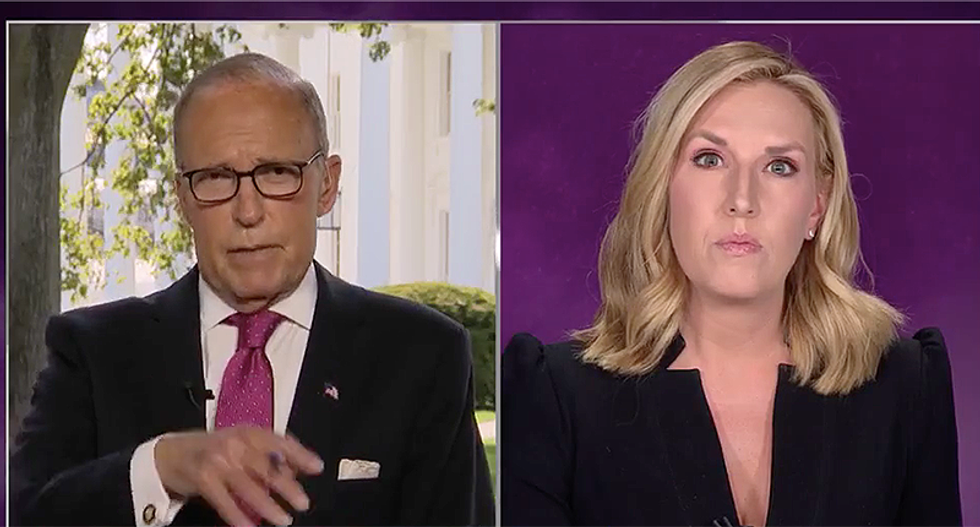 President Donald Trump's National Economic Council director Larry Kudlow struggled to justify why the jobs numbers are "good" after seeing the unemployment rate at 10.2 percent, down from 11.1 percent. At the same time, another 1.2 million people filed for unemployment for the first time this week, taking the numbers to 21 million Americans still unemployed.

Trump celebrated the numbers because jobs added were slightly greater than expected, but the numbers are a far cry from where they were in May and June, which set records with jobs coming back amid states reopening. This month just 1.8. million jobs were added in July, where in June there were 4.8 million. It was a number that prompted CNN's Poppy Harlow to ask Kudlow if he is concerned about a slow-down.

"Well, I don't know that there's a slow-down," said Kudlow, ignoring the significant decrease in new jobs added compared to the previous 4.8 million. Kudlow said it would be "uneven as it always is.

Kudlow then said that the coronavirus, which has now claimed over 160,000 lives, is slowing down.

"Two final questions for you, Larry, because when you talk, people listen," said CNN's Poppy Harlow. "Everyone in America listens on the economy when you talk, Larry, and -- and I'm wondering why you have consistently downplayed the severity of the pandemic. Back on February 25, you said, 'It's pretty close to airtight.' February 28: 'It's not going to sink the American economy.' March 6: 'Let's not overreact America should stay at work,' and just on June 12: 'There is no emergency, there is no second wave,' but since June 12, 45,978 Americans have died from COVID."

"If I can answer those. On June 12, when I said that, is what I also said it's not a second wave, it's part of the first wave, and that comes from our health scientists, so that's --" Kudlow said before Harlow cut in.

"You said it's not an emergency," Harlow replied.

"And in -- in late February, I didn't make a forecast, I said it would -- I said at that time, as a matter of fact, there were only -- there were fewer than 20 cases and a lot of people across the spectrum, doctors and others, who made the same case," claimed Kudlow, ignoring that there wasn't a COVID-19 test broadly available in the US in Feb.

"There were even people who said it wouldn't be worse than an ordinary flu," Kudlow continued. One of those people was President Donald Trump. "My point is there were fewer than 20 cases. Now, as those numbers deteriorated rapidly, I, of course, changed my mind and, of course, with the facts. I was not making a forecast. I kind of resent your little knit-picking here because I don't know what that has to do with today's job numbers."

"I'm not nitpicking, Larry," Harlow responded. "I think people listen to you."

"I will defend my statement," Kudlow cut in while Harlow talked over him, saying that the president clearly listens to him on economic suggestions.

"There were fewer than 20 cases, Poppy!" Kudlow said, again forgetting that there was no testing to confirm if there were more cases and people dying had the virus. At the time, people who died and were suspected of having COVID-19 were also not tested to see if it was from the virus. There was an uptick in deaths in February from the flu or "lower respiratory diseases," all of which could have been coronavirus related.

"As you look at mortality rates as you move through February into March, anything documented as flu, you have to wonder is it truly viral-tested flu or just people thinking it was flu when maybe that was all Covid?" said Dr. Thomas McGinn, author of the study.

"I will defend my statement," Kudlow claimed, insisting there were only 20 cases.

"Well, on June 12 there were a lot of cases, and you said it's not a second emergency, and even your friend Kevin Hassett said to me 'We're looking at a second wave in certain places and we should have some shutdowns,'" Harlow noted.

A man who allegedly shot a 7-year-old Jewish boy and his father outside a NYC kosher market with a BB gun has been arrested and charged with a hate crime, The Times of Israel reports.

The boy and his father were shot with the BB gun from a passing vehicle while exiting a Staten Island kosher grocery store on Sunday. The child was hit in the ear and the father in the chest. Jason Kish, 25, was charged with assault as a hate crime, acting in a manner injurious to a child under age 17, reckless endangerment and assault.

A former assistant to a Florida Republican congressional candidate was arrested on kidnapping, sexual battery and other charges.