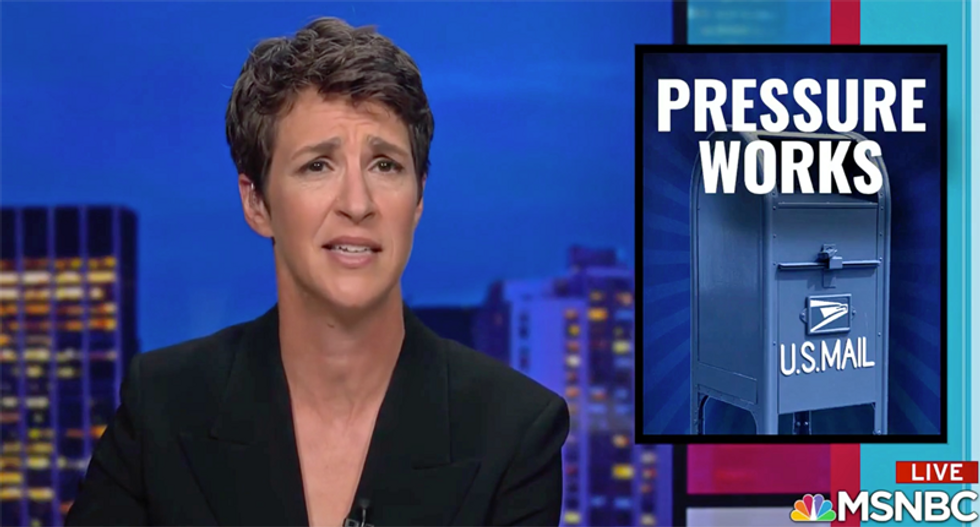 MSNBC anchor Rachel Maddow's opening segment on Friday focused on a positive story of political pressure stopping one of the Trump administration's attacks on the U.S. Postal Service.

Maddow reported how NBC Montana reporter Maritsa Georgiou had doggedly reported on the removal of postal boxes in Missoula, where she is based. Missoula has been a long-time Democratic Party stronghold.

As Georgiou chased the story, she learned there were also plans to remove boxes in the battleground of Billings. And more planned for the blue town of Bozeman. And other towns.

Sen. Jon Tester (D-MT) was already focused on the issue, but Georgiou's reporting and the public attention got both Republicans in the congressional delegation, Daines and Rep. Greg Gianforte, to issue critical statements.

By the end of the day, the Postal Service in Montana had dropped the plans to remove the boxes.

Here’s the final product that hit the 5pm news tonight. Thanks to all of you for helping share this today! #mtnews… https://t.co/ea43K6Ehdm
— Maritsa Georgiou (@Maritsa Georgiou) 1597448573.0

"If the Trump administration thinks that Republican voters can somehow be talked into the idea that slowing down the mail and stealing all the mailboxes is great for America and therefore Republican senators and members of Congress will go along with it and cheer for it, that just might need more thought given the way the post office works in all of our lives," Maddow explained.

"This is the kind of fight that most Americans have a side they want to be on and it is not the side that is stealing the mailboxes and telling us that, 'Yeah, I don't think it's going to work out for you to get your ballot in on time.' But the important thing here is that pushback works," she reported.

"They were planning on doing this everywhere and then people got really mad when they noticed them doing it and they screamed and yelled and that stopped them," Maddow explained "In this era, especially as we are getting closer and closer to the election and this stuff is getting more and more blatant and overt, hoping for the best doesn't work, right? Shame doesn't work. We've seen the president flat out admit it, right? That he's doing this stuff for the reasons we know he's doing it. Hope doesn't work, shame doesn't work, but noise does, it turns out. Not always, but it's sort of the only thing that's working now."

"Locally focused outrage and complaint and hard questions and 'We're not going to take it!' sometimes works. At least it did today in Montana and then very soon thereafter nationwide. You can thank Montana, I believe, for having saved your state from going through this same thing maybe even before the rest of us knew it was starting to happen," Maddow concluded.

I just looked up all of the addresses of the Missoula collection boxes on the removal list. Take a look: #mtnews… https://t.co/iDed2LckZd
— Maritsa Georgiou (@Maritsa Georgiou) 1597424036.0

You can add @GregForMontana to the list of Montana lawmakers writing letters. His team just sent me this letter to… https://t.co/OfAklHLhYS
— Maritsa Georgiou (@Maritsa Georgiou) 1597431738.0

Also, couldn’t have done this today without the help of @marwhi @Swyberg3 and @darrenNBCMT . Thanks so much to them!
— Maritsa Georgiou (@Maritsa Georgiou) 1597449451.0