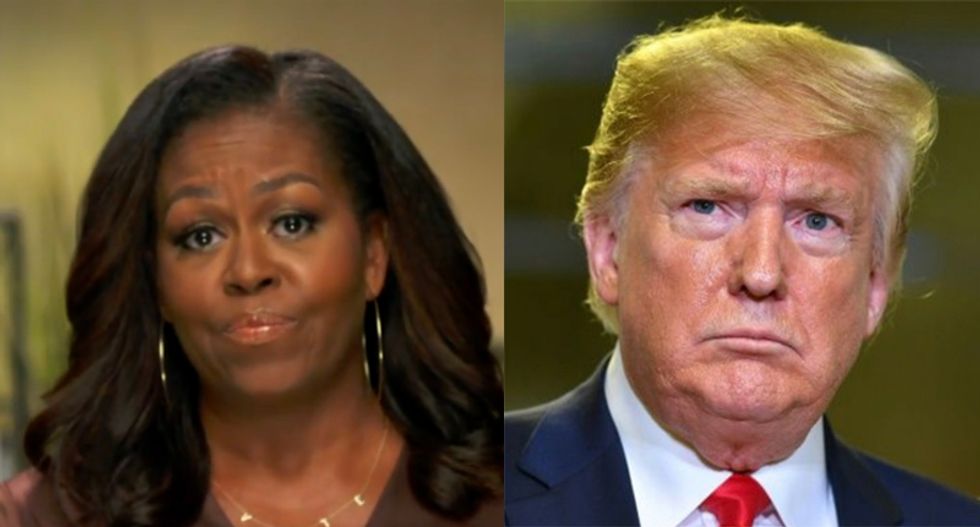 "I’m just devastated by the shootings in Kenosha. First, the seven shots from a police officer’s gun at Jacob Blake’s back as his children looked on. Then, two nights later, the bullets that killed two protestors, with a young man only 17 years old arrested and charged with homicide," Obama wrote.

In the next paragraph, she went after President Donald Trump -- without using his name.

"These past few months, I’ve been thinking a lot about what our kids are seeing every day in this country—the lack of empathy, the division stoked in times of crisis, the age-old and systemic racism that’s been so prominent this summer. Sometimes they see it on the news. Sometimes they see it from the White House Rose Garden," she noted.

While Trump has complained about the protests against racist policing, Obama praised the activists.

"Like so many of you, I’m exhausted and frustrated right now. It’s a weight that I know Black and Brown people all across the country are shouldering once again. And we’re so often left wondering how things will get better. But then I see the swift and powerful protests that have risen up around the country—from the world of sports to the folks standing up peacefully and purposefully in their own communities—and I see the glimmers of something different," she wrote. "These protests and actions will not make Jacob Blake walk again. They will not erase the trauma from those children. And they will not bring back anyone who’s been taken from us. But they will do something. They already are—opening eyes, rattling consciences, and reminding people of all backgrounds that this problem wasn’t solved earlier this summer and it won’t be any time soon unless we all make a change."

"And that is who I am appealing to today, and who we all must appeal to in the months ahead—to those who look like us and those who don’t; to those who vote like us and those who don’t; to those who’ve experienced this kind of trauma and those who haven’t. We cannot just look to the oppressed to fight these battles alone. We need to reach out to people, and ask them to search their hearts and listen to their inner voices—the voices that say that this simply isn’t right. Because when that happens, the change we seek cannot be denied," she wrote. "So I want to encourage you all to keep using your bullhorns and your ballots to reform policies in our cities and our neighborhoods. And I hope you’ll keep speaking out wherever you are—board rooms, class rooms, dining rooms, break rooms, locker rooms—because if enough of us do that, we’ll open up even more minds. And maybe we can prevent the next name from being added to this seemingly unending list of tragedies."

She included a link to a page titled "anguish and action" on the Obama Foundation website.

"And make sure you’re registered to vote—and if you think you’re already registered, take a minute to confirm that your information is updated," she added.

I’m just devastated by the shootings in Kenosha. And I can’t stop thinking about what our kids are seeing every day… https://t.co/7IqMrXMCQd
— Michelle Obama (@Michelle Obama) 1598642309.0