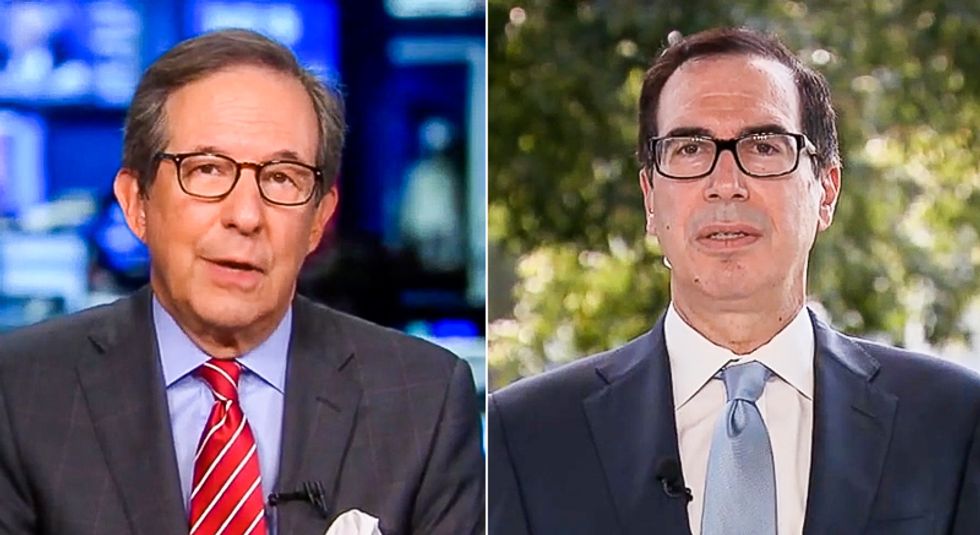 Treasury Secretary Steve Mnuchin suggested on Sunday that Americans will have to pay the government back for any payroll tax reduction unless President Donald Trump is reelected.

In an interview on FOX, host Chris Wallace noted that the president's latest executive action on COVID-19 financial relief is "not a tax cut."

"It's a payroll tax suspension," Wallace explained. "Isn't there a danger that a lot of businesses won't pass these saving through to workers because they're going to hold on to the money because at some point, according to this executive action by the end of the year, those payroll taxes are going to be have to be paid anyway?"

"Well, the president wanted to do a payroll tax cut," Mnuchin replied. "We could do the payroll tax deferral. He's going to go to the American people and tell them that when he's reelected, he will push through legislation to forgive that so, in essence, it will turn into a payroll tax cut."

Wallace also wondered if executive action would cause a reduction in Social Security and Medicare benefits.

"That's not the case," Mnuchin said without evidence. "There would be an automatic contribution from the general fund to those trusts funds. The president in no way wants to harm those trust funds."

"We're already running huge deficits," Wallace observed. "So how are you going to pay for it from the general fund?"

"You just have a transfer from the general fund," Mnuchin insisted. "We'll deal with the budget deficit when we get the economy back to where it was before."