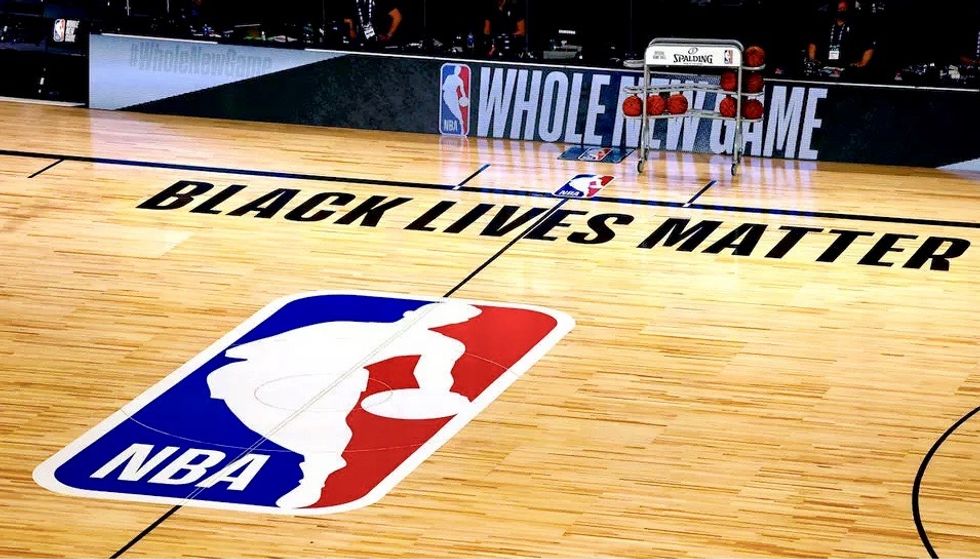 A basketball court shows the NBA logo and the slogan Black Lives Matter before the start of a game between the Denver Nuggets and the Miami Heat on August 1, 2020 in Lake Buena Vista, Florida, USA. © Kevin C. Cox, AFP

NBA playoff games were called off for a second straight day on Thursday following a boycott by the Milwaukee Bucks but the league is optimistic of restarting games by the weekend after players voted to continue the season.

After a day of drama inside the NBA's Orlando "bubble" on Wednesday, the fate of the season had been left hanging in the balance following the Bucks' no-show in protest at the police shooting of African American Jacob Blake in Kenosha, Wisconsin on Sunday.

The NBA was forced to postpone all three playoff games on Wednesday following the unprecedented boycott by Milwaukee.

However a more conciliatory mood emerged at a further players meeting early Thursday, with teams reaching agreement to continue. James and the Lakers were reportedly "on board" with the decision.

In a statement following an NBA Board of Governors meeting, the league said games could resume as early as Friday.

"We are hopeful to resume games either Friday or Saturday."

A video conference call, involving players from the 13 teams in Orlando along with representatives from the National Basketball Players Association, the league office and NBA Labor Relations Committee Chairman and basketball legend Michael Jordan, will be held later Thursday to discuss next steps.

Milwaukee's dramatic boycott on Wednesday sent shockwaves around US sport, and prompted an array of other professional leagues to follow suit.

Three Major League Baseball games were called off before they were due to begin while Major League Soccer postponed five of six games taking place.

In tennis, the ATP and WTA Tours announced that Thursday's play at the Western & Southern Open in New York had been called off, with the event resuming on Friday.

The WNBA women's basketball league also postponed its slate of games on Thursday for a second day running.

Several NFL teams meanwhile also halted training camps on Thursday as they build towards the start of their new season.

"How can you hear the pain Black people are going through and dismiss it as nothing?" Cincinnati Bengals rookie quarterback Joey Burrow said on Twitter.

"How can you hear the pain and respond with anything other than 'I stand with you'?" he added.

Carlos -- who along with teammate Tommie Smith was barred from the 1968 Mexico Olympics after their iconic black power salute on the medal podium -- said Wednesday's protests were the latest chapter in "a history of black people fighting for the same causes, the same situations."

"I admire, respect and cherish the vision of those young individuals to take the initiative, to say life is valued far greater than trophies and championships and anything with basketball," Carlos told USA Today.

But there was a predictably cool response to the NBA activism from Donald Trump.

The US leader, who has repeatedly sparred with African-American athletes since taking office, accused the league of playing politics.

"I don't know much about the NBA protest. I know their ratings have been very bad because I think people are a little tired of the NBA," Trump said in Washington.

"They've become like a political organization, and that's not a good thing."

"Change doesn't happen with just talk!! It happens with action and needs to happen NOW!" James wrote on Twitter.

Demands for racial equality have reverberated across basketball following the killing of unarmed black man George Floyd by Minneapolis police in May.

NBA teams have knelt in protest during the pre-match playing of the US national anthem, while the words "Black Lives Matter" have been painted onto each court staging games in Florida.

Players, many of whom took part in protests against Floyd's killing, have been allowed to wear jerseys bearing social justice messages.