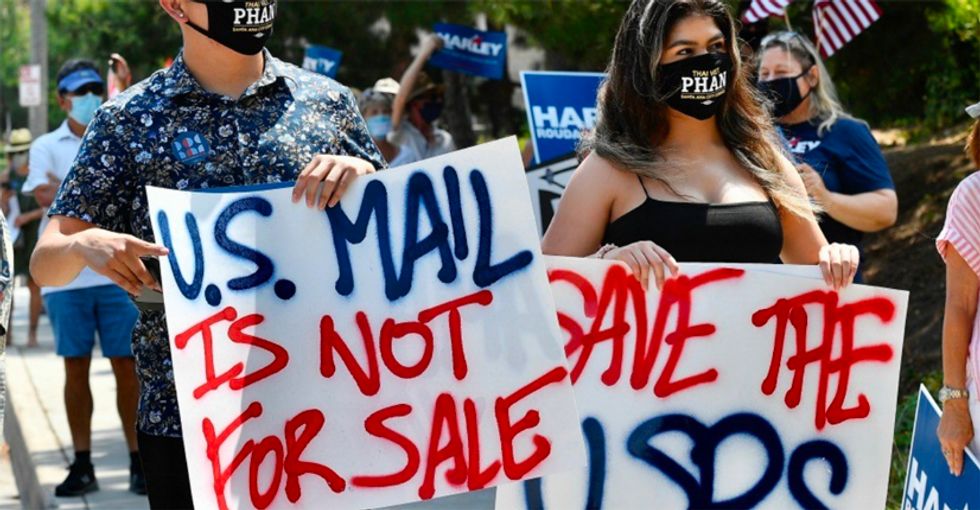 As of Friday afternoon, more than 650 demonstrations were planned as part of "Save the Post Office Saturday," a national day of action in which people across the U.S. will demand that President Donald Trump and Postmaster General Louis DeJoy end their assault on the U.S. Postal Service. Demonstrations will begin at 11:00 am local time.

The number of planned protests at hundreds of post offices grew as DeJoy testified before the Senate Homeland Security and Governmental Affairs Committee on Friday, telling lawmakers he has "no intention" of returning hundreds of mail sorting machines that have been decommissioned in recent weeks, severely cutting postal workers' ability to deliver mail quickly. The postmaster general claimed the machines are not needed.

The removal of machines in battleground states including Florida, Pennsylvania, and Michigan will have serious implications for the general election in November, civil rights advocates have warned, as many Americans—particularly Democratic voters—plan to vote by mail due to the coronavirus pandemic.

This week, DeJoy announced he was suspending changes to mail operations until after the November election to "avoid even the appearance of any impact on election mail," but made clear that he has no plans to return mailboxes and sorting machines that were removed or restore overtime hours that he cut.

The president has also said he would block emergency funding for the Postal Service and for election assistance, saying that the funding would allow for "universal mail-in voting," which he has falsely claimed would result in a fraudulent election.

MoveOn, which is joining with the NAACP, SEIU, the Working Families Party, and other advocacy groups to organize the day of action, said people across the country are rejecting Trump's attack on the election and the Postal Service.

"From the most remote village in the Alaskan tundra to the tiniest island in the Everglades, there's one connection we've always depended on: the mail. Together, we're coming together to support a beloved system that every American relies on," said Rahna Epting, executive director of MoveOn.

A poll released this week by Yahoo News and YouGov showed strong opposition to Trump's blocking of Postal Service funding, with 50% of respondents saying they "strongly" disapprove and only 28% saying they approve. Nearly two-thirds of voters surveyed said they feared they would be prevented from voting due to Trump and DeJoy's actions.

"The mail shapes our lives and our livelihoods. It's how millions get our medicines, send holiday greetings, and receive the resources we depend on," said Epting. "And, in this pandemic, the mail is how millions of us will deliver our democracy. We reject these attacks on the USPS. We demand full restoration of machines and personnel plus full funding for the post office. We will fight until every vote is counted."

MoveOn and other organizers are offering print-at-home signs for attendees to bring to the protests, emblazoned with phrases including, "Stamp Out Fascism," "Roll Back DeJoy, Restore the Machines," and "4 Million Prescriptions Delivered Daily."

Participants will be urged to wear face coverings at the socially distanced demonstrations, MoveOn said.