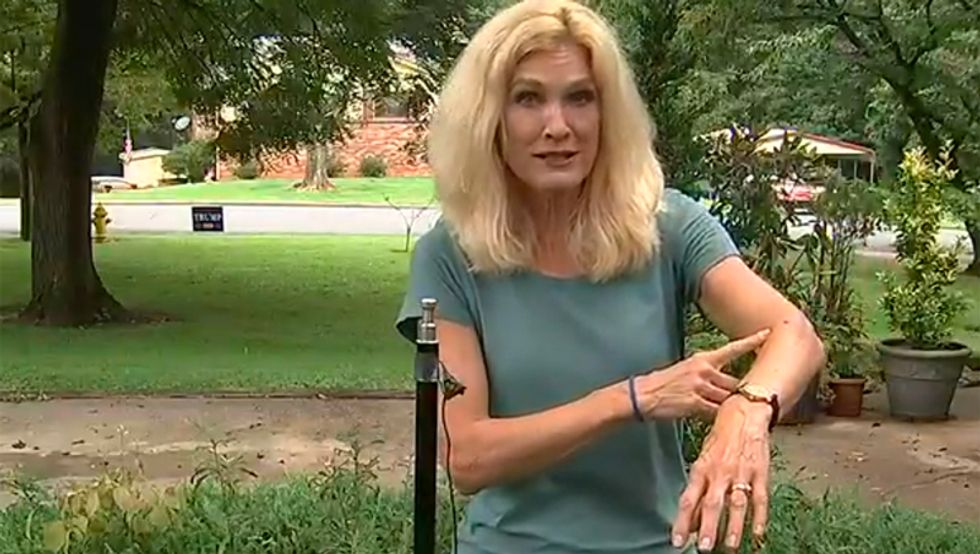 On Saturday, Fox 13 Memphis reported that a man in Lincolnton, North Carolina shot a woman in the arm with a BB gun after she mistakenly thought his Trump sign had been put in her brother's yard as a joke, and tried to remove it.

"Peggy Fox told WSOC-TV she saw a political sign in what she thought was her brother’s front yard. When she went to remove it, his 76-year-old neighbor shot her with an air gun, striking her near the elbow," said the report. "Fox said she thought the sign was placed in the yard by a prankster, as her brother never talks about politics. What’s more, the sign was placed closer to her brother’s front door than the neighbor’s house, and the exact property lines were unclear to her."

"Fox didn’t make it a few steps before she felt the 'excruciating pain' of the pellet," continued the report. "The neighbor, Worth McAllister, said he yelled at Fox to stop before he opened fire. Fox said she didn’t hear him say anything. When Fox confronted McAllister, he encouraged her to call the police."

The BB is reportedly still in Fox's arm. McAllister is being charged with misdemeanor assault over the incident.

“You can’t shoot people on your property,” Fox told WSOC-TV. “He actually believed he could shoot me if I was on his property, and to me, that’s terrifying.”