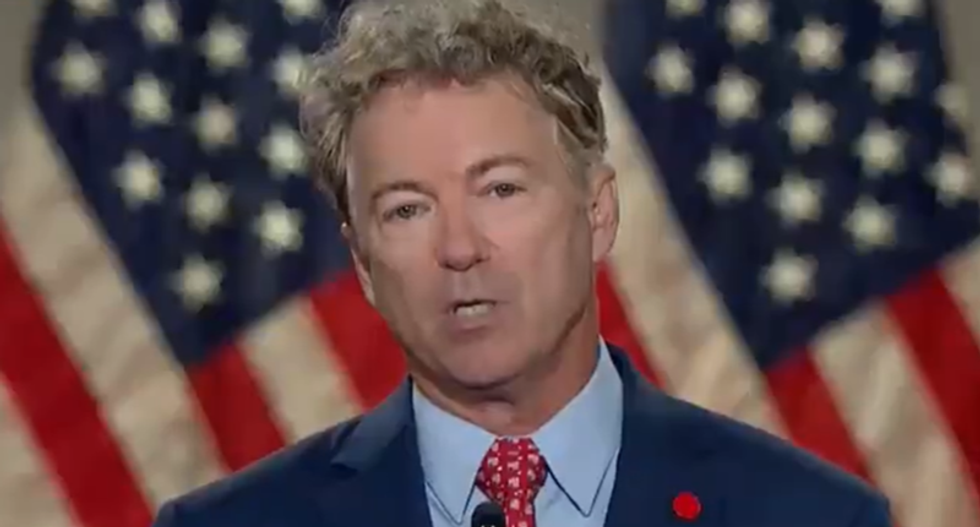 U.S. Senator Rand Paul is calling for the FBI to arrest the few dozen protestors who hassled him after he left President Donald Trump's RNC speech Thursday night. The Kentucky Libertarian Republican's claims don't appear to match the reality of what happened, based on multiple videos.

Sen. Paul says he and his wife left the White House and at some point instead of taking a shuttle they decided to walk several blocks to their hotel.

Later, he went on "Fox & Friends," which told viewers based on the videos it was more like about 30 people, not 100.

Paul, who all by himself for months has been holding up Senate passage of the Emmett Till Anti-Lynching Act – which already passed the House almost unanimously, 410-4 on February 26 – claims he and his wife could have been killed.

"They were inciting a riot and they would have killed us had the police not been there," Paul told Fox News.

"I truly believe this with every fiber of my being, had they gotten at us they would have gotten us to the ground, we might not have been killed, might just have been injured by being kicked in the head, or kicked in the stomach until we were senseless," he added.

"I believe there are going to be people who are involved with the attack on us that actually were paid to come here, are not from Washington, D.C., and are sort of paid to be anarchists," Paul says. "This is disturbing because really, if you're inciting a riot that's a crime, but if you're paying someone to incite a riot that person needs to go to jail as well."

Fox News adds, "the senator is still calling on the FBI to make arrests and conduct an investigation into the 'interstate criminal traffic being paid for across state lines' because people have already been killed in other cities."

It does not appear Paul offered any evidence of "interstate criminal traffic being paid for across state lines."

This appears to be early in the confrontation. Paul and his wife are protected by police.

Another video. Hardly "angry mob of over 100" who "would have killed" him.

D.C. police officers had to escort @RandPaul to the Hotel Washington as dozens of demonstrators followed and jeered… https://t.co/yIYr6Ea8rZ
— Clarence Williams (@Clarence Williams)1598592325.0

In this video Sen. Paul gets, well, not even tussled. Protestors appear to push one of the police officers guarding the Pauls, the officer almost falls, Paul helps him. But not out of concern for the officer.

He told Fox News the protestors were "attempting to push the police over to get to me, so at one point they push a policeman backwards, he stumbles and he's trying to catch his balance and I catch the back of his flak jacket to stabilize him to make sure he's OK because he's our defense."

Is hassling any U.S. Senator on the streets of DC after midnight a good idea? No. Did Senator Paul handle it well and tell the truth? The videos speak for themselves.