Republican strategist says he can't believe GOP Senate is going along with Trump unilaterally raising taxes: 'We're really going to do that?' 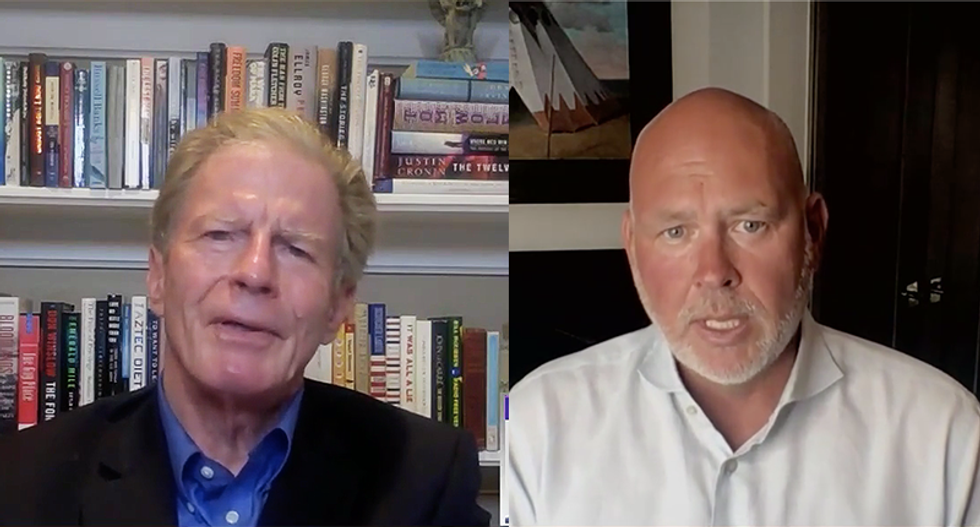 In discussion with MSNBC, two Republican strategists, Steve Schmidt and Stuart Stevens, Schmidt explained that after having to deal with the likes of Sarah Palin on Sen. John McCain's bid for the presidency, he really hoped the GOP wouldn't make the mistake again of choosing someone so clearly ill-equipped. But then there was President Donald Trump.

He explained that Trump's decision to go at it alone over the coronavirus stimulus was a clear indication that he is desperate and losing.

"Donald Trump is cornered in his Bedminster Golf Club and he stood there yesterday signing unconstitutional executive orders, engaging in nonsense, non sequitur, nonsense, gibberish, proclaiming himself a victim to a half-drunk Saturday crowd of golfers assembled there, people that pay $350,000 to join the club," said Schmidt.

He explained that outside of the golden gate of Trumptopia, 10 million-plus Americans are out of work still, there are 160,000-plus Americans dead from COVID-19, and over 5 million Americans have been infected with a shattered economy.

"We see America weakened -- our standing in the world completely shattered and the farce is playing out at the Bedminster Golf Club," Schmidt continued. "It's a travesty. There's no plan to deal with COVID in a couple of weeks. We're going to start at the front of a mortgage and eviction crisis, all across the country we'll see the chaos that results when the schools are unable to open or open for a period of a couple of weeks before they have to shut down. Of course, our total unpreparedness for the second wave of COVID in flu season over the cold winter months. The United States is the epicenter of coronavirus. This is one of the greatest catastrophes in the history of America. It's one of the most lethal events in the history of the country, and it happened singularly because of the incompetence of Donald John Trump."

He went on to say that Trump is intellectually and morally unable to lead through a crisis and that the U.S. is paying a high price as a result.

"I think it's going to be a Trump Party for the foreseeable future," he added. "There's no desire to change among Republicans. When I say it was all a lie, think about this weekend. Republicans were pretty much silent and go along with the president unilaterally cutting or raising taxes? We're really going to do that? So, [if] we have a Democratic president who goes out and announces -- going to announce a wealth tax and going to raise the capital gains tax, just do it unilaterally, that's really what we're going to do? It just seems to be this complete abdication of the responsibility to protect government as a functioning force. This transactional Trumpism that I'll do this because maybe it will help me in the next news cycle, forgetting it's the president of the United States, the most important country in the world. What you're doing matters and sets precedence and people are watching you. It's appalling. It's the most anti-conservative instinct I can imagine."