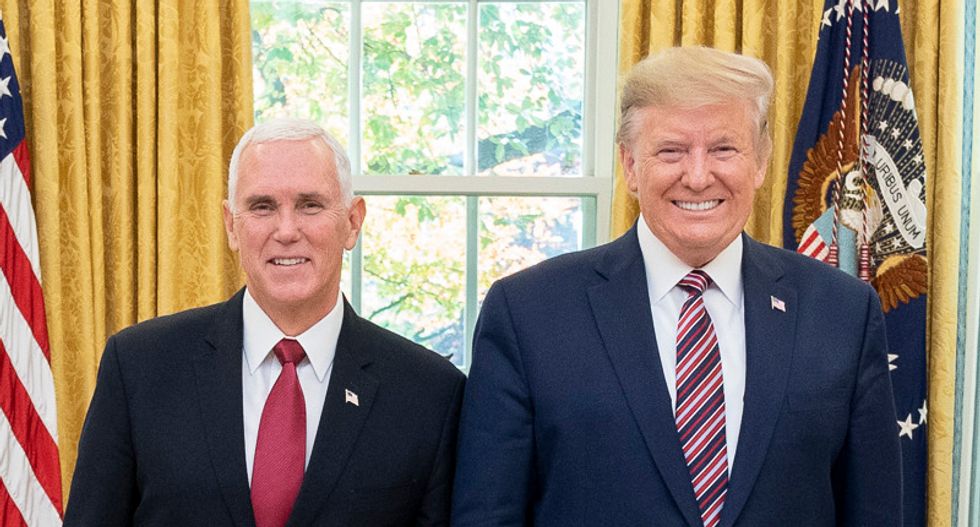 The Republican Party is to make its case next week for four more years of President Donald Trump after his Democratic opponent Joe Biden wrapped up his party's convention with a vow to end what he called a "chapter of American darkness."

With the nation digesting the impact of an unprecedented all-virtual gathering due to the coronavirus pandemic, Trump on Friday intensified his attacks on Biden as Republicans sought to flesh out their counterprogramming to the Democratic convention.

The Democratic Party released figures Friday that suggest it set a high bar for its event, raising $70 million during the four days and generating 122 million views on network and cable television as well as digital livestreams.

Accepting the Democratic presidential nomination with an impassioned 25-minute speech, Biden said the United States was facing a "life-changing election" in November.

And he issued a somber warning: "The current president has cloaked America in darkness for much too long. Too much anger. Too much fear. Too much division," the 77-year-old former vice president said.

"May history be able to say that the end of this chapter of American darkness began here tonight as love and hope and light joined in the battle for the soul of the nation."

Trump, 74, also framed the contest in apocalyptic terms, accusing the Democrats of holding the "darkest, angriest and gloomiest convention in American history."

Vice President Mike Pence also took aim at the Democratic convention, where a parade of speakers denounced Trump's character, his handling of protests against racial injustice and accused him of mismanaging the coronavirus pandemic.

"So many of the speeches at the Democratic national convention were so negative," Pence said on "CBS This Morning." "They presented such a grim vision for America."

"Joe Biden last night said that democracy's on the ballot, that character's on the ballot" and the economy will not recover until after the coronavirus pandemic, Pence said.

"Newsflash to Joe Biden: the economy is coming back. The only real threat to our economy is a Joe Biden presidency."

The Republican convention begins Monday in North Carolina and, like the Democratic event, it will be mostly online because of the COVID-19 outbreak which has left 175,000 people dead across the United States.

Trump will accept the Republican nomination Thursday in a speech at the White House, shrugging off criticism over the use of the presidential residence for campaign purposes.

'We must come together'

"In 47 years, Joe did none of the things of which he now speaks. He will never change, just words!" Trump said, alluding to Biden's long record in politics as a senator from Delaware and Barack Obama's vice president for eight years.

Trump, who has been waging a campaign against mail-in voting, which polls show Democrats are more likely to use during the pandemic, also expressed concern that a result may not be known on election night, the latest step in what critics say is an effort to undercut confidence in the US election.

"You're not going to be able to know the end of this election, in my opinion, for weeks, months, maybe never," he said.

Unlike four years ago, when Hillary Clinton emerged as the Democratic nominee after a bitter primary battle with Vermont Senator Bernie Sanders, the Democrats appear more united this time around.

Sanders, who also challenged Biden for the nomination and remains a favorite of the party's progressive wing, has unabashedly thrown his support behind the nominee.

"We must come together, defeat Donald Trump and elect Joe Biden and Kamala Harris as our next president and vice president," Sanders said. "My friends, the price of failure is just too great to imagine."

Biden's White House run -- his third -- features a historic first with his choice of a black woman, California Senator Harris, to be his running mate.

Biden has been leading in the polls and Republicans will be looking to their convention to give Trump a bounce.

The candidates are scheduled to hold three debates, the first on September 29, before Americans cast their ballots on November 3.