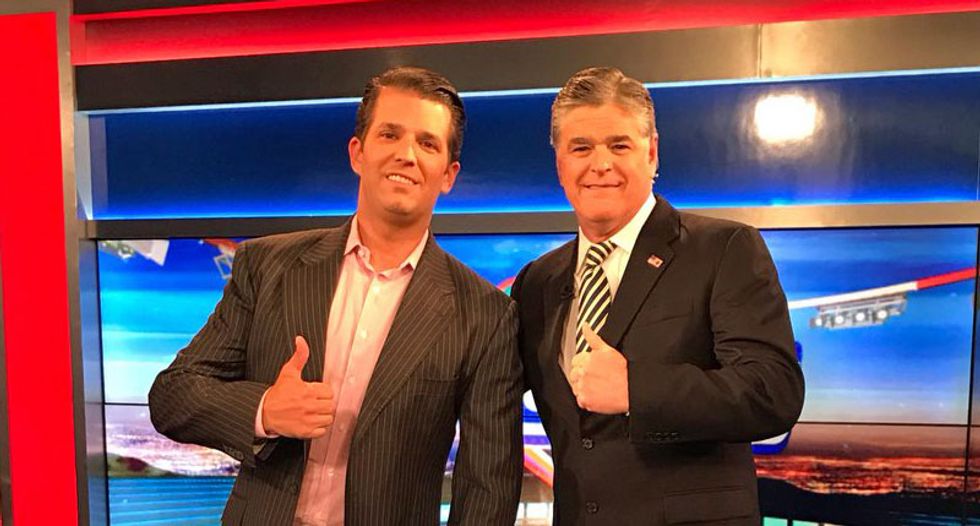 The book, titled "Live Free or Die," does not go on sale until later this month. However, an email sent from an RNC HQ address over the weekend suggests that the committee will make a bulk pre-order — if it has not already done so.

"It won't be available until later this month," the email says. "But because you're a TOP supporter, we're giving you PRIORITY-ACCESS so that you can get your copy FIRST."

The bonus kicks in at a $75 starting price point, and the email suggests that the president, whom Hannity has advised and routinely interviews for the network, involved himself personally in the process: "Trump has requested that we save one for YOU."

"All you have to do is contribute $75 or more in the NEXT HOUR," the email says, "and we'll send you your SIGNED copy of Live Free or Die."

It is unclear how many copies the RNC may have acquired, or how much it may have spent on the effort.

Though the promotional email went out over the weekend, the landing page said as of Monday morning that the hour-long window was still open: "Please contribute $75 in the NEXT HOUR to get your SIGNED copy of LIVE FREE OR DIE! . . . This limited-time offer ends in ONE HOUR, so be sure to claim your signed copy NOW."

The landing page includes an option to make the donation a monthly recurring contribution, as well as a personal request attributed to the president to make a repeat donation again only a few days later, on Aug. 4:

President Trump: I want to keep our End-of-Month momentum going into August. Can I count on YOU to step up? Join the Trump Fundraising Blitz NOW: Donate an additional $75 automatically on 8/04.

Donors must opt out of the options, both of which are pre-selected.

Another WinRed landing page — this one telling donors their $250 donation will allow them to sign a "petition" to advocate labeling antifa "terrorist organization" — features the Trump-Pence campaign logo. The donation form says, "Official Website of Donald J. Trump for President."

However, the page features the same fine print at the bottom: "Paid for by WinRed. Not authorized by any candidate or candidate's committee."

The page does not inform prospective donors that the president does not have the power to designate antifa a terrorist organization.

Last November, the RNC spent nearly $100,000 on orders for Donald Trump Jr.'s book, "Triggered," punting it to the top of bestseller lists.

"We haven't made a large bulk purchase, but are ordering copies to keep up with demand," an RNC spokesperson told the New York Times two days after the "Triggered" fundraising email was sent. "Each book is sold to an individual who supports the Republican Party."

Though the spokesperson said the books were "sold," Federal Election Commission records classified them as "donor mementos." The day of the purchase, the president's son sent out an RNC fundraising email offering signed copies to supporters who contributed at least $50. Hannity's book comes with a $75 price tag.

It remains unclear if the RNC has already bought copies of "Live Free or Die." FEC reports will not be available until the end of August.

When asked whether Fox News was comfortable with the Republican Party promoting and politicizing one of its self-identifying journalists, who regularly interviews the president, a network spokesperson told Salon that was a question for the book's publisher, Simon & Schuster.

Simon and Schuster did not respond to Salon's request for comment. Neither the Trump campaign nor the RNC responded to Salon's detailed questions.