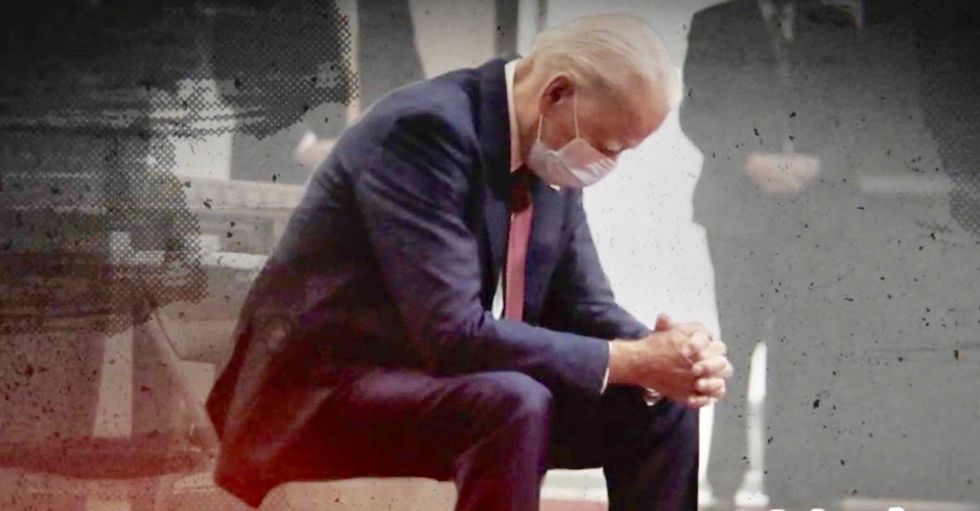 A new anti-Biden attack ad from the Trump campaign is filled with falsehoods, and ends by mocking the Democratic presumptive presidential nominee praying in a church. Some on social media are slamming the President and his campaign for "anti-religious bigotry" and "demonizing prayer."

"Deep in the heart of Delaware Joe Biden sits in his basement, alone, hiding, diminished," the ad begins.

Many Americans are sitting in their basements – that's where Biden's office and TV studio are – and they're sitting alone, and hiding, and diminished, so to speak, as a New York Times opinion column notes. But they are doing so because of Trump's horrific handling of the pandemic – the worst management of the coronavirus crisis in the world.

The ad goes on to make ludicrous claims, including one that in the ad's small print cites something from 2013.

It closes with a voiceover claiming, "Biden has no answers," which is demonstrably false – and projection on Trump's part.

"And after five decades of failure, he never will," the narrator says.

As The Washington Post's Dave Weigel notes, Biden is in a church, praying. "An image meant to make him look defeated/old is of him praying in church!"

Weigel points to the photograph's source, which says it was taken June 1 at Bethel AME church by an AP photographer.

That day, June 1, for over an hour Biden met "with community leaders at a black church in Delaware," to discuss the George Floyd protests.

"Donald Trump is the only president in our history to tear gas peaceful Americans and kick a priest out of their church so he could profane it for a photo op," Joe Biden's Director of Rapid Response says. "Which makes it unsurprising - but no less sickening - that the Trump campaign just denigrated Joe Biden for praying."

Here's what others are saying:

"Accidentally" gives the Trump campaign way too much credit. They made this same "mistake" last month, using the… https://t.co/Z6jNriXsA3
— Adrienne Watson (@Adrienne Watson) 1596641044.0

Make no mistake. @realDonaldTrump and his campaign knew exactly what this photo was and used it anyway. It's a sla… https://t.co/txq8FGM62N
— Matt Fuehrmeyer (@Matt Fuehrmeyer) 1596641229.0