‘Stupid’ Donald Trump Jr. mocked after trying to distance himself from Bannon’s scheme 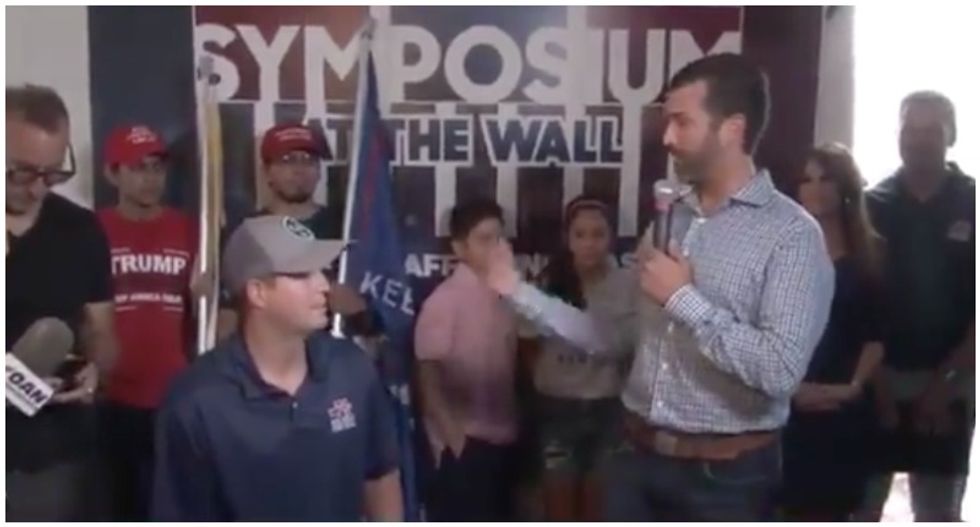 In the wake of reports announcing the arrest of Steve Bannon over his connection to the “We Build the Wall” crowdfunding campaign that allegedly misappropriated the funds they raised, focus is circling back to Donald Trump Jr., who enthusiastically endorsed the campaign in the summer of 2019.

"This is what capitalism is all about. This is private enterprise at its finest. Doing it better, faster, cheaper than anything else. What you guys are doing is amazing," Trump Jr. said at the time.

Donald Trump Jr. praised We Build The Wall and Brian Kolfage at a 2018 event: "This is private enterprise at its fi… https://t.co/zZOwoZuKeG
— andrew kaczynski (@andrew kaczynski) 1597937701.0

Now that news that the campaign was allegedly a scam has broken, Trump Jr. released a statement distancing himself from the campaign, saying that although he gave a speech at one of their events, he "has no involvement with their organization," adding that his "previous praise of the group" was simply because he believed in their "supposed intention" to help build a wall on the southern border.

But Trump Jr.'s critics on Twitter couldn't resist bringing up his past praise of the group.

.@DonaldJTrumpJr's We Build the Wall testimonial that this fraud scheme is "private enterprise at its finest" is ju… https://t.co/nyAj8ySQwc
— Matt Ortega (@Matt Ortega) 1597943211.0