The investigation that led police to stolen Banksy in Italy 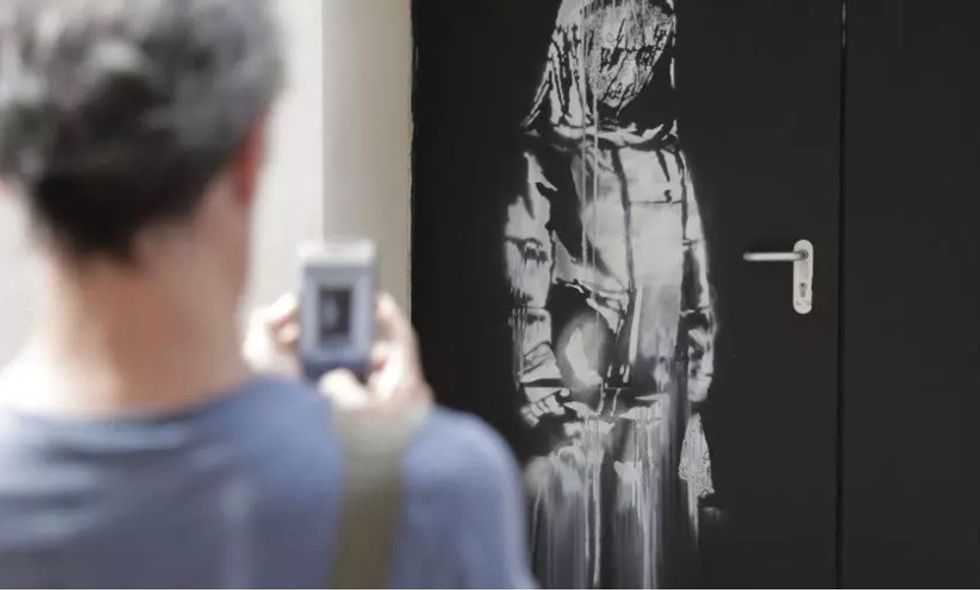 File photo taken June 25, 2018 of a man taking a photograph of an artwork by Banksy on a side street near the Bataclan concert hall, Paris. © AFP - THOMAS SAMSON

A stolen cutter, CCTV footage, phone taps, loose-tongued suspects... this is how an artwork by famed street artist Banksy painted on the door of the Bataclan club in Paris was discovered in Italy 18 months after being stolen.

At 4:00 am on January 26, 2019, three men wearing hoodies and masks take a cutting tool to the metal door of the Bataclan.

It is not just any old door, but the emergency exit of the famous Parisian music venue where 90 people were murdered by Islamic State gunmen on November 13, 2015.

The stencilled white image is of a "sad young girl" in homage to the victims of the Bataclan attack.

It is all over in just a few minutes: the thieves load the door into the back of the Citroen van, whose number plate has been made illegible, according to captured CCTV footage.

"It was an important investigation" for the officers, some of whom had worked on the Bataclan attack, a source close to the case tells AFP.

By "honing in" on phones located in the vicinity of the Bataclan at the time and then along the route taken by the getaway van, tracked using surveillance cameras, police are able to identify and tap the lines.

A year later, police detain three men suspected of breaking into a DIY shop in the Isere department in southeastern France.

A cutting tool is among the stolen objects and one of the suspects boasts of having been involved in a break-in in Paris.

With a link now established between the suspects and the theft of Banksy's "the sad young girl", police use wire-taps and surveillance to track down the receivers of the stolen artwork.

According to the investigators' findings, the artwork is taken to first to Isere, then to the south of France and from there on to Italy.

In Italy, the painting is initially hidden in a hotel in Tortoreto, in the central region of Abruzzo.

But when the hotel undergoes renovation work, it is relocated to an abandoned farm in Sant'Omero, some 15 kilometres (nine miles) away.

The hotel's owner, an acquaintance of one of the men suspected of receiving stolen goods, Mehdi Meftah, says he did not know what the bulky package contained.

Police decide to detain the whole gang, but the arrests are hampered by the coronavirus lockdown, the source tells AFP.

In a joint operation with Italian police, the investigators seize "the sad young girl" in Abruzzo on June 10.

The attendant publicity forces police to speed up the arrests and a total of nine people are detained in France in the following days.

Two are charged with robbery in an organised gang and another four with receiving stolen goods, including Mehdi Meftah.

The 39-year-old, with his bouncer-like looks and tattoos, founded the luxury T-shirt brand "BL1.D", which has an 18-carat gold ingot sewn into the neckline. He is suspected of ordering the theft.

"His accomplices say he wanted to keep the door for one of his houses," says the source close to the investigation, acknowledging that trying to re-sell such an artwork would be "very difficult".

"It would be like trying to re-sell the Mona Lisa," his lawyer, Yves Sauvayre, tells the weekly newspaper, Journal du dimanche, denying his client had ordered the theft.

"He was presented with a fait accompli. He agreed to take the door in order accepted to help out old acquaintances. He didn't pay a penny," the lawyer says.