The three amigos of scam artistry: Steve Bannon, Roy Moore and the My Pillow guy 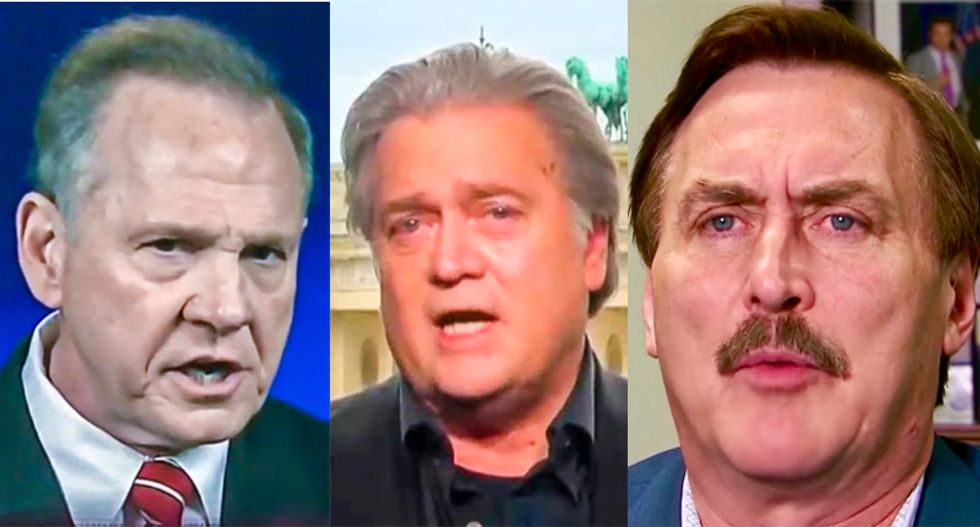 You forgot about Roy Moore, didn't you? With the rest of the Trumpian shitstorm that slams you in the face every day, Roy Moore probably just slipped out of the old brainpan: Roy chasing teenage girls around Alabama malls, putting up stone monuments engraved with the Ten Commandments, getting fired as chief justice of the Alabama Supreme Court for defying the U.S. Constitution, and running for the Senate and losing to Democrat Doug Jones in the reddest state in the union back in 2017 with the support of his good friend, Steve Bannon.

Yep, along with Donald Trump, Moore's other big supporter back then was the same Steve Bannon who was just arraigned in federal district court in Manhattan on charges of mail fraud and money laundering that carry prison terms of 20 years each. The same Steve Bannon who ran Trump's campaign back in 2016, and got up in front of the CPAC convention the following year and told everyone how he was going to "dismantle the administrative state" in Washington, before being fired from his White House job in a power struggle with Jared Kushner and slinking away to his lavish townhouse on Capitol Hill known as the "Breitbart Embassy" to change out of his pin-striped suit and wingtip lace-ups and don the three-shirt look of the Gulfstream populist he would transform himself into, as he jetted around with his "security detail" giving speeches to right-wing political parties all over Europe.

Who the hell are these people? How did we come to a place where we wake up in the morning and the first thing we hear is that this human tapeworm called Steve Bannon has been arrested on a 150-foot private yacht owned by a Chinese billionaire off the coast of Westport, Connecticut, for running a scam that raised money to build Donald Trump's wall on the border with Mexico — but really what Bannon and three of his partners in the scam were doing was paying themselves hundreds of thousands of dollars so they could buy boats and Land Rover SUVs and first-class airfares and lavish dinners and high-end hotel rooms and fancy golf carts and cosmetic surgery and home improvements on Florida condos?

I read the indictment, all 24 pages of it, and the scam it describes is incredibly complicated. They set up a GoFundMe page and raised about $25 million to fund a private-venturer section of Trump's border wall, and they pledged again and again in their fundraising pitches that they wouldn't take a cent for themselves. Of course Bannon and the rest of them decided a better use of the funds they raised would be to pay for their lavish lifestyles, so they established a nonprofit corporation and a shell company and multiple bank accounts all over the country so they could clandestinely move the donated money around and pay themselves secret salaries amounting to hundreds of thousands of dollars for at least one of them, and at least a million for Bannon. I read the indictment twice, trying to understand how the scam worked. The scheme was so byzantine, it was clear to me that Bannon or any of the other three scam artists could have made use of their talents to get themselves a real job, with a real nonprofit, and earn a real salary doing real work for a real cause, rather than the fake We Build the Wall scam that has built only 300 feet of wall somewhere near El Paso, Texas, according to the New York Times.

Bannon's pal Roy Moore pulled a similar scam down in Alabama when he set up a phony nonprofit called the Foundation for Moral Law. After pledging that he wouldn't take a penny for himself in salary, Moore proceeded to do just that, paying himself at least $180,000 a year over a period of years, totaling more than $1 million. The foundation also paid for Moore's travel expenses, health benefits and security guards, and paid a salary of $65,000 a year to Moore's wife and separate salaries to two of his children. When the foundation hit a rough spot in its fundraising and couldn't pay Moore's total salary, he was issued an IOU promising to pay him the difference in assets from the foundation at some future date.

The words "birds of a feather" come to mind, don't they? I mean, these guys can't seem to resist the urge to fleece believers of their hard-earned cash, promising dreams like building the wall Trump said the Mexicans would pay for, and in Moore's case, promising to beat back the heathens and return prayer to the public schools and the Ten Commandments to the public square. All of which is apparently best accomplished from the back seats of Land Rovers and lie-flat seats in first class and leather recliners on private jets and sundecks of 150-foot private yachts.

As if Bannon and his scam-buddies weren't enough, this was also the week that we learned that COVID-19 will soon cease to be a threat to the health and well-being of Americans because Mike Lindell, the "My Pillow guy," is bringing a miracle cure to market. Called Oleandrin, it has not been approved by the FDA, it hasn't undergone any double-blind testing and there is no proof whatsoever that it works. But there Trump was this week, meeting with Lindell and pushing the stuff like it was the new hydroxychloroquine. The My Pillow guy, naturally, has taken a seat on the board and has a financial stake in the company pushing the drug. Oleandrin, by the way, is the chemical that makes the plant Nerium oleander deadly.

What is it about these guys? Roy Moore is a religious nut, but even religious nuts are entitled to their beliefs, and if he wants to put a big rock with the Ten Commandments in his front yard, good on him. But he just couldn't resist scamming his beliefs into a million dollars in salary. Steve Bannon and his buddies are entitled to be all-in for Trump's wall on the Mexican border. But they couldn't resist raising money for the wall and using them for leisure boats and luxury SUVs and dinners at expensive restaurants and rooms in luxury hotels. As for the My Pillow guy, he's a millionaire many times over from selling his ridiculous pillows to the rubes with ads on Fox News. He didn't need to pad his bank with anything more than the stuffing from his pillows, but noooooo! He's got to come up with some scam "cure" for COVID from a poisonous plant and add it to Trump's bleach cure and hydroxychloroquine cure and sun cure, and yes, of course, make some bucks in the process.

Donald Trump has turned the White House into his own private piggy bank. There was so much self-dealing by the Trump Foundation that New York State shut it down and fined Trump $2 million for misusing the foundation for his own private business and political purposes. He could have established a real Trump University and taught the secrets of his real estate genius, but instead, he fleeced people out of their hard-earned dollars and was forced in 2016 to pay $25 million to settle claims by students he cheated.

Donald Trump didn't invent scams like the ones run by Steve Bannon and Roy Moore and the My Pillow guy, but he's based his entire life on the notion that there's a sucker born every minute. He's probably warming up the pardon pen for Bannon and his pals right now. The thing we've got to remember is that there will be no pardon for us if we don't get rid of him in November.