The untold story of the only A-bomb whistleblower OC Brewster 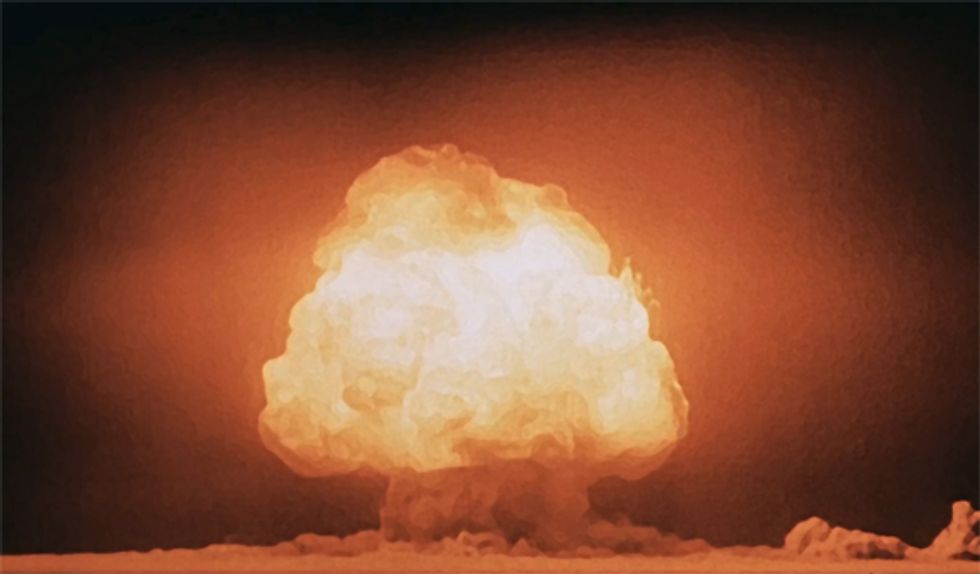 By United States Department of Energy - <a class="external text" href="https://en.wikipedia.org/wiki/Trinity_and_Beyond">Trinity and Beyond: The Atomic Bomb Movie</a>, Public Domain, Link

Adapted from Greg Mitchell's latest book,   The Beginning or the End:  How Hollywood--and America--Learned to Stop Worrying and Love the Bomb.

After toiling in a top-secret government program for two to three years, many scientists who were part of the Manhattan Project finally learned in 1945 that all that work was aimed at creating a revolutionary new weapon, the atomic bomb, and with Germany defeated, it might very well still be used--over Japanese cities in the months ahead.   Indeed, this would occur, seventy-five years ago this week. This eventuality deeply troubled some of them, fearing the toll on civilians, and the uncharted radiation effects, that would result, as well as setting a precedent for future use.

Yet none of them took these concerns public.   Wartime security controls were still very much in place and anyone who did leak or speak to the press faced severe penalties.   A key Chicago scientist, Eugene Rabinowitz, later recounted that he deeply considered speaking out.   It wasn't so much that he opposed any possible use of the bomb but that Americans deserved to know, in advance, what was likely about to be done by their leaders, in their names.   Amazingly, there is no record of anyone else within the massive Manhattan Project--with sprawling sites in a several states--coming close to doing that.

One of the most famous scientists who played a key early role in developing the bomb, Leo Szilard, did mount an earnest private campaign, gaining the support of dozens of atomic scientists in the project.  They petitioned President Truman to never use, or at least hold off using, the new weapon until Japan was given a much longer period to surrender, or possibly demonstrate the power of the bomb for the enemy before actually dropping it over a city.   The petition was blocked from ever reaching the desk of the president.

This has been documented by historians for decades.  Almost nothing has been reported about the saga of the one true "whistleblower" within the bomb project, a man whose name is almost lost to history:  Oswald C. Brewster.    And he took his warning straight to the president himself.

Brewster was an engineer for a leading Project contractor, the Kellex Corporation, living in New York City.  Deeply involved with the separation of uranium isotopes, he supported the race with Germany for the bomb.   Then, on May 24, 1945, risking arrest and long imprisonment for security violations--indeed he would later claim he was followed by agents and his phone tapped--he penned a powerful and prescient 3000-word letter and transmitted it through U.S. Army channels to Truman, Secretary of War Henry L. Stimson and the new (very pro-bomb) Secretary of State James Byrnes.

Brewster warned that an atomic bomb would easily destroy any large city and a massive number of civilians, spread dangerous radiation, and inspire many other countries to race for their own such weapon.  Therefore he opposed using it against reeling and surrounded Japan.   While admitting this was an "unpopular and minority view" among his peers--and might be considered by some "treason"--he felt duty-bound, as one of the relatively few Americans who knew about this plan, to take his protest to the top.

Brewster recognized the key factor influencing the decision to drop the bomb:  all of Truman's advisers, tightly bound to the Project and its success, had strong personal or career reasons for making sure the new weapon was utilized.  There was as well the need to justify having spent $2 billion (a massive number then)  to create it.  He pleaded for Truman to seek "disinterested counsel" from "unbiased" observers, a brilliant proposal.     "This thing must not be permitted on earth," the engineer asserted. "We must not be the most hated and feared people on earth, however good our intent must be....I beg you of you, sir, not to pass this off because I happen to be an unknown...There surely are men in this country to whom you could turn, asking them to study this problem."

Against all odds, the letter (unlike Szilard's petition) reached Stimson's desk, and he read it. Rather than rejecting the argument and/or its threat to security, he urged General George C. Marshall, the Army Chief of Staff, to peruse this "remarkable document" that summer and share "the impress of its logic," just as key high-level discussions about using the bomb against Japan were reaching a climax in Washington.

Stimson then delivered the letter directly to Truman himself, not knowing that the president had been sent his own version.  Somehow O.C. Brewster's message had reached the top.

There was no indication, however, that Truman read any version of it or discussed it with anyone.   The decision had been pretty well set by then, and he was traveling to Potsdam to confirm from Joseph Stalin that Russia would, as promise, declare war on Japan by mid-August  ("Fini Japs" when that occurs, Truman wrote in his diary, even without the use of the new bomb).  There he also issued his ultimatum to Japan to surrender unconditionally, and when that did not occur, the first atomic weapon was dropped over Hiroshima on August 6, and then over Nagasaki on August 9.  Then Truman allowed Japan to keep its emperor, a major "condition" that might have ended the war sooner.

Two months later, with the bomb project no longer secret, atomic scientists were now a little more free to voice their urgent concerns.   A group of them even inspired the MGM studio in Hollywood to launch the first movie to dramatize the story of the bomb and warn against making even more powerful weapons.   But Hollywood, like Washington, was not ready to take this warning seriously, and Truman and the military soon turned the movie, The Beginning or the End, into little more than pro-bomb propaganda.

There is no record of Brewster's response to the utter rejection of the entire spirit of his "whistleblower" letter, and he faded deep into obscurity--though he was never arrested for any security breaches.

Why does he remain the only true whistleblower among the tens of thousands who might have "leaked," as we refer to it today?  Of course, there were far fewer channels and outlets for whistleblowers back then.  It was wartime, and leakers knew they faced serious felony charges--as did members of the press. (Another lone actor, Daniel Ellsberg, sparked the same concerns with his Pentagon Papers release in the early 1970s.)  Most of those working in the Manhattan Project did not even know they were helping to create a revolutionary new military weapon.   Even when they did know, they were not only proud of the scientific advances but supremely serious about defeating fascism in Germany and Japan.   But still...only one whistleblower?    One has to wonder:  How many might there have been if more knew they were building an earth-shattering new device--and that it would soon be used not as a mere threat, not in a demonstration shot to encourage surrender, but dropped over the center of two cities, killing 200,000 people, ninety percent of them civilians.

Greg Mitchell's latest book is The Beginning or the End:  How Hollywood--and America--Learned to Stop Worrying and Love the Bomb.