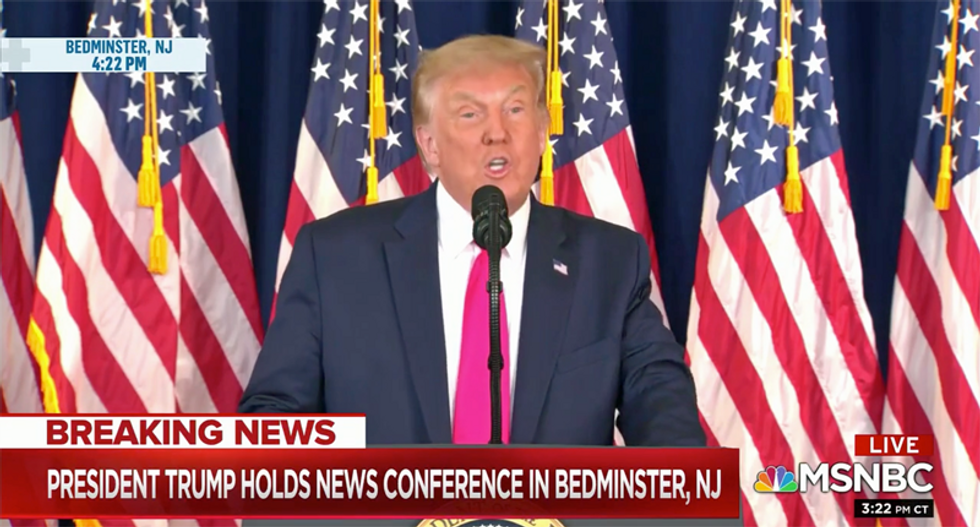 The president signed four executive orders -- which he erroneously referred to as bills -- but experts are unsure as to the legality of Trump's moves.

Here's some of what people were saying about the press conference:

This “press conference” is a campaign rally - complete audience of supporters in the back who laugh at his jokes an… https://t.co/h1aFHJE2gn
— Paula Reid (@Paula Reid) 1596919050.0

I assume the Secret Service is currently restraining the Bedminster bartenders who are instinctively trying to get… https://t.co/bUvqh9udT1
— Kevin M. Kruse (@Kevin M. Kruse) 1596918897.0

President Trump, confoundingly and wrongly, continues to refer to what he is signing — an executive action — as "a… https://t.co/zPXrEppCYK
— David Gura (@David Gura) 1596919279.0

Trump falsely claims that Democrats have not wanted to "do anything protecting people from eviction" -- not only ha… https://t.co/etUK7gfcBp
— Jacqueline Alemany (@Jacqueline Alemany) 1596919339.0

FACT CHECK: @JoshNBCNews: "On border wall: "POTUS talking about how the border wall would be finished around the en… https://t.co/zuzha2EXVv
— Andrea Mitchell (@Andrea Mitchell) 1596919142.0

I cannot believe and we should not accept that networks are continuing to run what are effectively infomercials for… https://t.co/oQueYMirQY
— Don Winslow (@Don Winslow) 1596919004.0

“The Green New Deal is childish,” ⁦@realDonaldTrump⁩ says during a press conference in which he has unloaded on Dem… https://t.co/pjpKQCyjxV
— Jeff Mason (@Jeff Mason) 1596919529.0

The mainstream media is always extremely reluctant to say that Trump lies because they can’t prove that he knows so… https://t.co/YQlIOWc19N
— Matt O'Brien (@Matt O'Brien) 1596921176.0

Cynical and unconstitutional: Trump might as well have directed the distribution of $100,000 to every family earnin… https://t.co/blRmw7sPWk
— Laurence Tribe (@Laurence Tribe) 1596920503.0

Trump has a laugh track in the audience at his news conference today—club guests at Bedminster—as he says if re-ele… https://t.co/d7dk3jeBy1
— Jennifer Jacobs (@Jennifer Jacobs) 1596919522.0