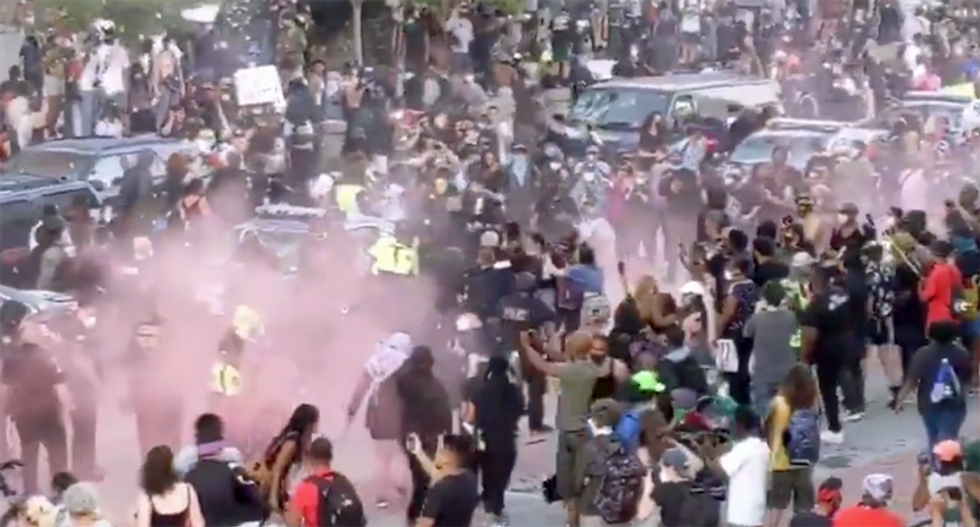 On CNN Saturday, Republican strategist Alice Stewart tried to blame the racial division and violence in cities across the country on Democrats — and was swiftly shut down by anchor Victor Blackwell.

"Victor, look, we can all agree that we do need to address racial tensions in this country, but it's a sad day when we have Democrats that are more concerned about the president's political fallout of this as opposed to the actual lawlessness and looting and violence and fires going on in this city," said Stewart. "To say that the president has condoned this, that's crazy. He has authorized to put federal troops in these cities that need it to protect federal buildings, which is exactly the role of these federal officials while we have Democrat-led cities and Democrat-led states that allowed this violence and lawlessness to go on for weeks and months."

"It's absolutely true," she shot back.

"If you say that it is absurd to politicize what's happening in this cities, and then come back and call them 'Democrat-run,' aren't you doing that same thing?" said Blackwell.

"No," said Stewart. "What I'm actually pointing out is the actual fact is that these towns that have allowed that lawlessness to go on are led by Democrats."

"Aren't most big cities led by Democrats, eight of the top 10, 24 of the top 30 are led by Democrats?" said Blackwell. "If there's rioting and looting and anarchy and arson and violence, Alice, isn't he pointing out his own failure, his own broken promise from four years ago?"

"Nothing is more dangerous than playing politics with the violence and divisions we're seeing in our cities," said Democratic strategist Robert Zimmerman. "It's unfortunate that you and the Republicans talk about 'Democrat-led' cities but don't talk about the Republican-led cities where there's violence and uprising, whether it's Omaha, Miami, Jacksonville, San Diego that have Republican mayors. We have to come together as a country and rise above partisan politics. No one defends looting and violence. But only Donald Trump is encouraging division and violence in our country through his conduct, through his divisive rhetoric and racist tweets."