Trump furious that he can't do rallies in Florida after its GOP governor made COVID spread 'worse': report 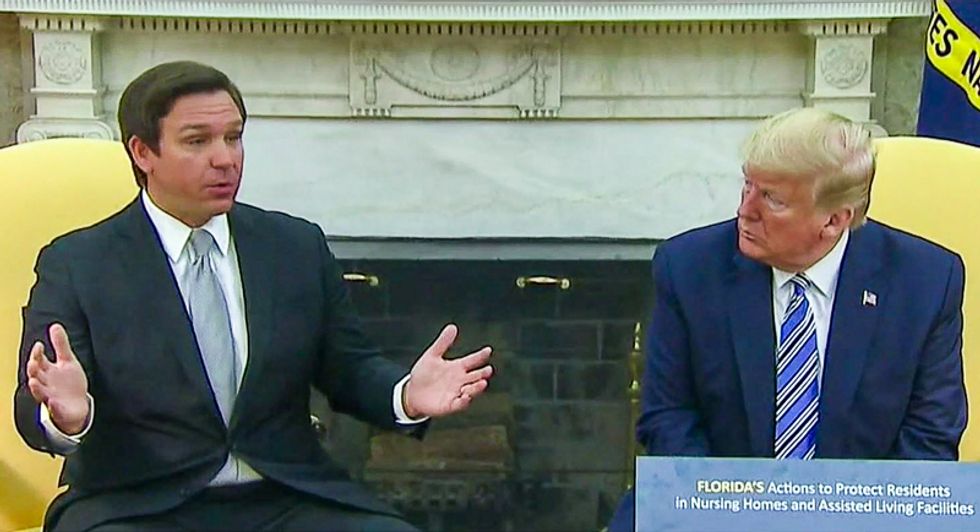 President Donald Trump is reportedly furious at one of his allies for taking his advice.

According to Vanity Fair's Gabriel Sherman, the president is angry that he can't hold any of his trademark campaign rallies in Florida amid its weeks-long surge in COVID-19 cases.

What's more, Sherman's sources say Trump is putting the blame for this predicament at the feet of Gov. Ron DeSantis, who has been eager to follow the president's commands to reopen state economies even as the country records more than 50,000 infections and 1,000 new deaths from the novel coronavirus every day.

"He thinks Ron has made it a lot worse," one Republican who spoke with Trump said.

Trump was forced to cancel his planned RNC acceptance speech in Jacksonville after public health officials told him there was no way to safely hold a mass gathering in the city without risking mass COVID-19 infection.

Nonetheless, one aide tells Sherman that "rallies are his jam" and that "Trump won’t be happy until he is doing multiple rallies a day."