Trump is trying to 'murder a national treasure' by undermining the Postal Service -- and it's a national emergency: columnist 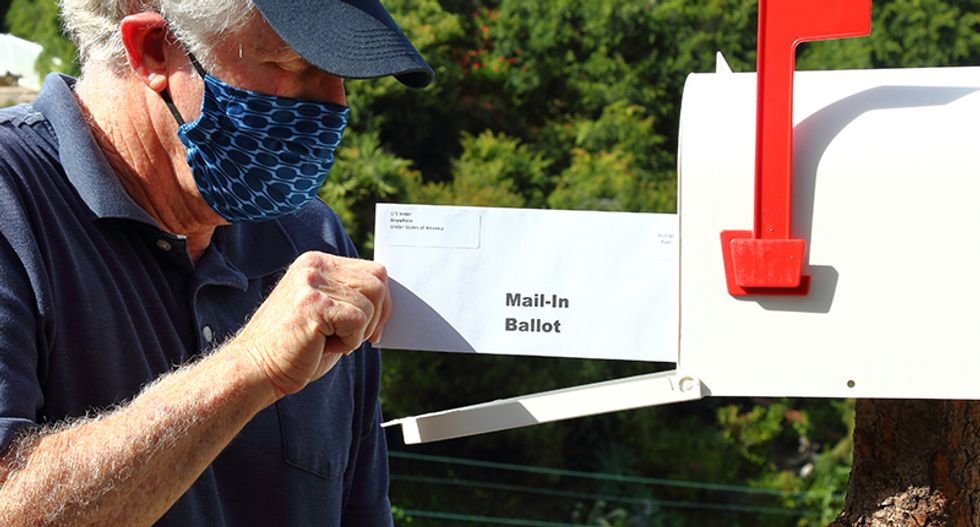 President Donald Trump has long had a war with the U.S. Postal Service, claiming that it should be turning a profit like a corporation instead of a "service" provided by the American government. Now that the election has turned to primarily absentee ballots, Trump is escalating his war against the USPS.

Writing for the Washington Post, columnist Paul Waldman equated it to the boy who kills his parents but pleads for mercy on the grounds that he's an orphan.

During an interview with Fox Business Thursday morning, Trump confessed that the reason he opposes the Democratic COVID-19 stimulus bill is that it fully funds the Postal Service, which he thinks means more people can vote and he'll lose the election.

“Now they need that money in order to make the post office work so it can take all of these millions and millions of ballots ... But if they don’t get those two items that means you can’t have universal mail-in voting," said Trump.

"So to summarize: Trump says an election in which too many Americans vote by mail would be illegitimate, so he’s doing everything he can to make sure that the Postal Service can’t handle the huge numbers of ballots it will have to deliver," wrote Waldman.

Any grants for the Postal Service won't be included in the previous coronavirus bailouts thanks to the White House as well.

“We told them very clearly that the president was not going to sign the bill if [money for the Postal Service] was in it,” an administration official told The Post in April.

Some are concerned that going to their polling places will expose them to the virus. So, voting by mail is the safer option, but the White House and the Postmaster General Louis DeJoy, appointed by Trump, is coming up with new ways to slow down the mail. DeJoy is a GOP megadonor who gave millions to Trump and the GOP. He's fully invested in doing whatever it takes to ensure the GOP wins.

"Soon after taking office, DeJoy ordered a series of changes in policy that shocked postal employees. He banned overtime and told carriers to leave mail behind at distribution centers, causing it to pile up day after day," said the Post. "Employees also report that sorting machines that help speed mail processing have been removed from postal facilities. The inevitable result has been slower delivery, with letters and packages arriving late and many Americans simply not getting their mail every day. You’ve probably noticed it yourself."

DeJoy ushered in a new policy that treats ballots like "bulk-rate mail" instead of first class mail, as it was previously. That means the Americans can no longer ensure a ballot will arrive quickly.

“The House is seriously concerned that you are implementing policies that accelerate the crisis at the Postal Service,” particularly with regard to the election," a letter from 175 House Democrats sent to DeJoy said.

DeJoy claimed he hasn't done anything outside the norm.

"The following scenario is not only possible, but highly likely," warned Waldman. "It’s a week from the election and millions of people finally get around to requesting an absentee ballot. They fill out the ballot and mail it back, but by the time it finally makes its way to their local officials, Election Day has passed and their votes don’t count."

He explained that it's because 34 states don't accept ballots simply because they are postmarked on Election Day. They have to be received by Election Day. Mailing it a few days before the election isn't going to cut it. Given DeJoy's new rules, mailing it a week in advance may not work either, otherwise your ballot may be thrown in the trash.

"This is election theft in progress. And as awful as that is, it’s made even more despicable by the fact that to rig the election, Trump is trying to murder a national treasure," wrote Waldman.

“To bind the Nation together,” a key tenant of the USPS says.

"Think how important that is right now, at a time when we have a president working so hard to tear us apart. It’s no wonder he looks at the Postal Service and sees it as one more thing he wants to destroy," closed Waldman.