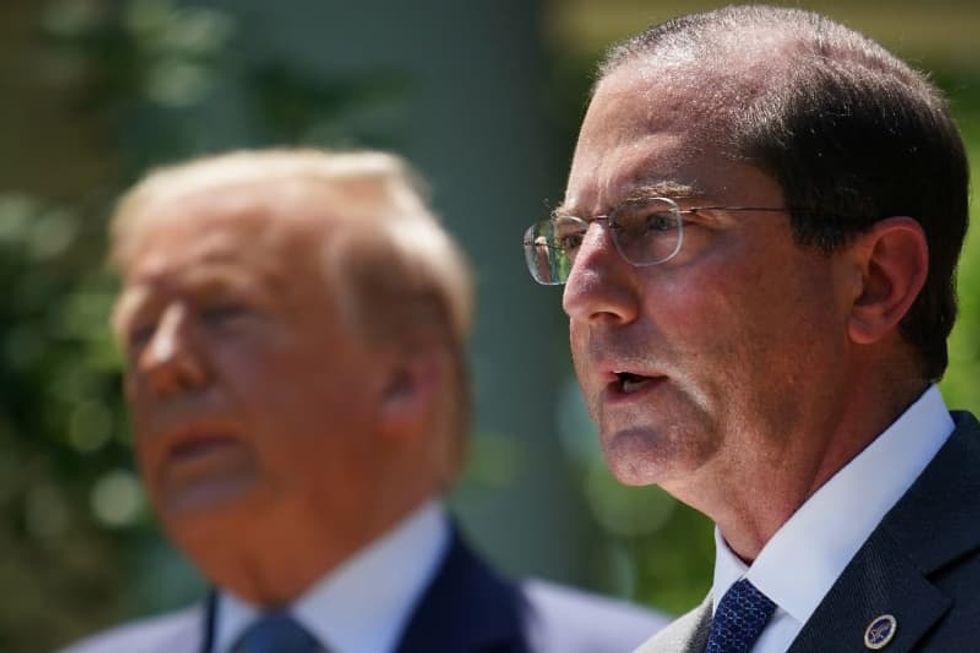 The United States announced Wednesday its highest-level visit to Taiwan since it switched diplomatic recognition to China four decades ago, a move Beijing blasted as a threat to "peace and stability".

The visit, which will be headed by health chief Alex Azar, comes as relations between the world's two biggest powers plunge to historic lows.

"This marks... the first Cabinet member to visit in six years, and the highest level visit by a US Cabinet official since 1979," said Washington's de facto embassy, the American Institute in Taiwan, with no date yet given for the visit.

The United States recognised Beijing over Taiwan in 1979. Washington remains the leading arms supplier to the island but has historically been cautious in holding official contacts with it.

Beijing views Taiwan as its own territory -- vowing to one day seize it -- and it bristles at any moves by other countries to recognise or communicate with Taipei.

"China firmly opposes official exchanges between the US and Taiwan," Wang Wenbin, a spokesman for China's Ministry of Foreign Affairs, said as he called for the visit to be cancelled.

"We urge the US to abide by the one-China principle... to avoid seriously endangering Sino-US relations, as well as peace and stability across the Taiwan Strait."

Relations have warmed dramatically under President Donald Trump, who has used embracing democratic Taiwan more closely as a way to hit back at authoritarian Beijing as he clashes with China's leaders on a host of issues, including trade and the coronavirus pandemic.

Taiwan's success at stopping its own virus outbreak -- and its emergence as one of Asia's most progressive democracies -- has also earned the island growing bipartisan support in Washington.

"The Trump administration is increasing its relations with Taiwan to a record-high level, sending a message to China that the US will not sacrifice Taiwan for its relations with China," Eric Huang, an international relations analyst at Tamkang University in Taipei, told AFP.

Shortly after Trump's election win in 2016, Tsai phoned to congratulate him, making him the first president -- sitting or newly elected -- to speak directly with a Taiwanese leader since 1979.

Taiwan is massively outgunned by China and Trump's administration has sold a number of big-ticket military items -- including fighter jets -- that previous presidents more wary of angering Beijing had balked at.

Trump also signed a bipartisan bill in 2018 upgrading relations and allowing more high-level visits to take place between senior US and Taiwanese officials.

In their statements Washington and Taipei painted Azar's visit as linked to Taiwan being a leading example in the battle against the pandemic.

Despite its proximity and close economic ties to China -- where the outbreak emerged late last year -- Taiwan has fewer than 500 cases and just seven deaths thanks to a world-class tracing and testing regime and a virtual shutdown of its borders.

"Taiwan has been a model of transparency and cooperation in global health during the COVID-19 pandemic and long before it," Azar said.

But Beijing sees Azar's visit as part of a wider attempt to give Taiwan greater international recognition.

It has ramped up diplomatic, economic and military pressure on Taiwan ever since the 2016 election of Tsai, who rejects Beijing's view that the island in part of "one China".

It keeps Taiwan diplomatically frozen out of global bodies such as the World Health Organization, and has poached its dwindling number of official allies.

That pressure campaign has only bolstered Tsai, who won a landslide re-election earlier this year.

"Beijing... will likely view (the visit) as further evidence of the Trump administration moving away from the 'one China policy'," Bonnie Glaser, director of the China Power Project at the Center for Strategic and International Studies, told AFP.

"But it isn't precedent-setting and it is justifiable given Taiwan's exemplary performance in responding to COVID-19 and Beijing's exclusion of Taiwan from the World Health Assembly."

Clayton Dube, director of the University of Southern California's US-China Institute, said sending a health official should be "less contentious" than an envoy from the State Department or Pentagon.

"Given the increasing tensions between Washington and Beijing, it is good that the Trump administration has not chosen to send an official Beijing would consider a provocation," he told AFP.

The last cabinet-level trip to Taiwan was in 2014, when the then head of the Environmental Protection Agency visited.

The most recent before that was a trip in 2000 by a transport secretary under then US president Bill Clinton.