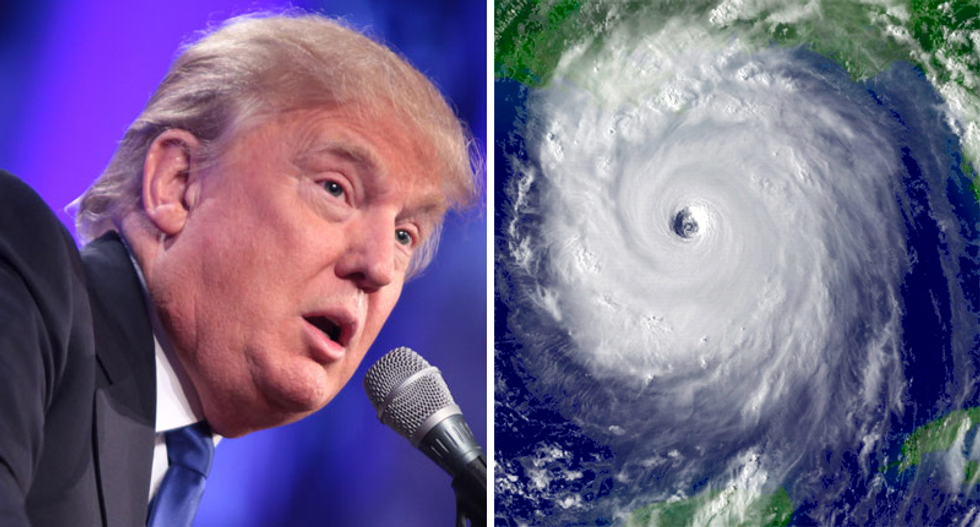 Composite image of Donald Trump by Gage Skidmore and Hurricane Katrina by the National Hurricane Center.

With the Republican-controlled U.S. Senate on vacation despite the expiration of enhanced unemployment benefits, President Donald Trump has sought to use Federal Emergency Management Agency (FEMA) funds as a workaround.

Trump's plan would have FEMA pay $300 a week in enhanced unemployment if the state pays $100.

One problem with Trump's workaround is that we are approaching the peak of the Atlantic hurricane season.

"As 2020’s record-setting hurricane season enters its most active phase, President Donald Trump wants to take billions of dollars away from hurricane-related disaster relief to provide expanded unemployment benefits due to the COVID-19 pandemic," the Miami Herald reported Friday. "Last weekend, Trump announced a series of executive orders after congressional leaders and the White House could not agree to another coronavirus relief bill that would have likely expanded federal unemployment benefits. One of the orders would allow the president to take up to $44 billion in disaster relief funds from the Federal Emergency Management Agency to pay for COVID-related unemployment claims."

"But if a major storm bears down in Florida in the coming weeks, Trump’s executive order would potentially divert funds from the recovery effort. Ahead of Hurricane Irma in 2017, Congress scrambled to pass a relief bill because FEMA was scheduled to run out of disaster relief money two days before the storm’s projected landfall date. Irma made landfall two weeks after Hurricane Harvey caused billions of dollars in damage in Texas and two weeks before Hurricane Maria ravaged Puerto Rico," the newspaper explained.

Carolos Condarco, a spokesperson for Rep. Donna Shalala (D-FL), blasted Trump for taking away the money.

“Anybody who lives in Florida knows that the hurricane season is incredibly unpredictable,” Condarco said. “We need to be able to marshal all the resources that are available to quickly address these problems. Taking FEMA money to pay for unemployment benefits when [scientists] are predicting the most active season on record is incredibly risky and the president is playing with fire.”