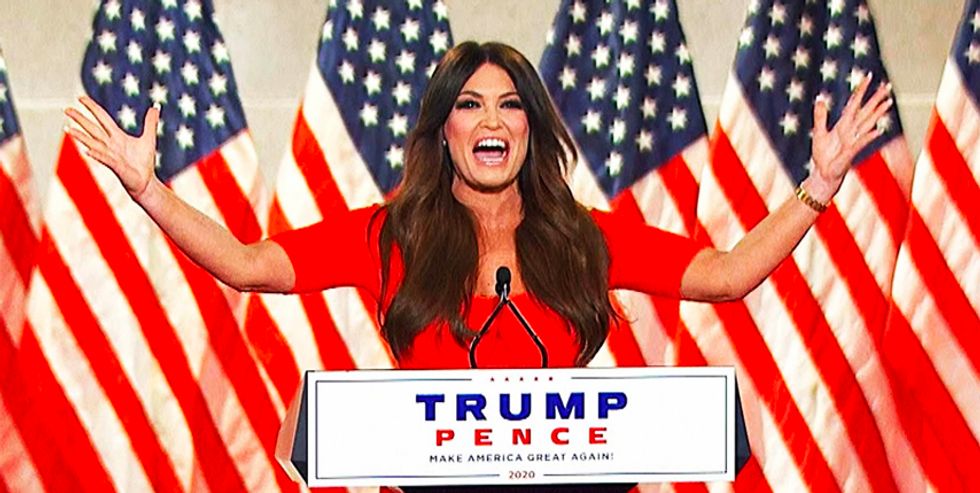 President Donald Trump called his son's girlfriend Kimberly Guilfoyle after she spoke at the Republican Convention on Monday evening last week to tell her that she was just like Eva Perón, the late first lady of Argentina from 1946 until her death in 1952, reported the Daily Beast.

“That was fantastic…so amazing,” Trump said on the call. “So much energy…so much passion.” Sources confirmed that Trump said, “nobody could have done that but you,” going so far as to call her “my Kimberly.” He claimed it was the “greatest” speeches he’d ever seen.

Trump, who has long been obsessed with the musical Evita, seeing it six times in theaters with his first wife Ivana. But now Trump has transferred his obsession to former Fox News host Kimberly Guilfoyle.

"The Fox News host had lobbied to become White House press secretary early in the administration, but Trump had shown little interest, according to two former aides," a 2019 Atlantic report said.

“Even he can tell the difference between the attractive women on Fox who have a little bit of substance, and those who will be derided as airheads,” an aide said. Then she began dating Donald Trump Jr., the president's named successor.

"The family was friendly to Guilfoyle in person, but there were signs of disapproval," the report continued. "One source told me that after her attendance at a White House Fourth of July party sparked a round of fawning press coverage—upstaging Jared and Ivanka—Don was contacted by an official informing him that he would need to clear his guests the next time he visited. And as Thanksgiving approached, the president made it known that Guilfoyle wasn’t welcome to join the family at Mar-a-Lago, two Trump associates told me. (Spokespeople for the White House and Don denied this.)"

Some thought that Trump was annoyed with their relationship being a distraction from him.

"But according to one longtime Trump adviser, there may have been another reason for his displeasure. Over the years, Trump had frequently made suggestive comments about Guilfoyle’s attractiveness, the adviser told me, and more than once inquired about whom she was dating," the Atlantic also said.

Guilfoyle may have earned Trump's love and obsession, but she was mocked ruthlessly on Twitter for about 24 hours after her speech. Her loud scream started the #GuilfoyleChallenge where people would post mash-ups of Guilfoyle with others screaming at the top of their lungs.

Despite not fitting the president's attraction template, she is one of many in the Trump orbit that the president may feel fits his allure quotient.