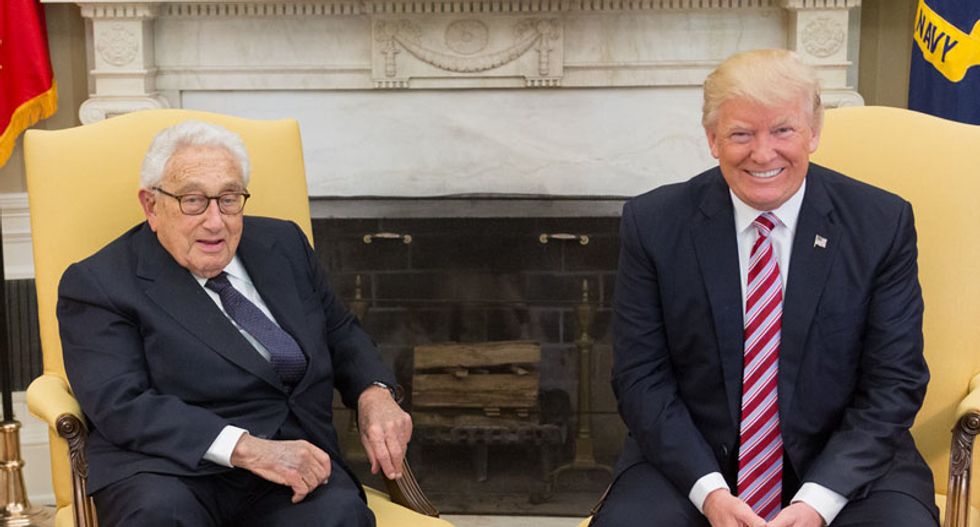 Whatever you think of the agreement between Israel and the United Arab Emirates to open diplomatic relations in exchange for Israel's temporary halt to its planned annexation of Palestinian territories, the deal is driven by a hard-headed, hard-hearted realpolitik that's characteristic of Henry Kissinger — who happens to have visited with Donald Trump in the White House several times while the deal was being made. (The photo above was from the second of at least three visits.)

I can't prove that Kissinger's fingerprints are actually on the Israel/Emirates deal. But since he was deeply involved in settling the Yom Kippur War between Israel and several Arab nations in 1973, and since his recent visits with Trump were obviously more than just photo ops, it's time — once again — to understand Kissinger's premises and modus.

First, diplomacy is duplicitous by nature. Its practitioners have to move stealthily, beneath presidents' and prime ministers' fine phrases and grand public pretensions, to stem the blood-dimmed tide in the world's endless "swirl of lusting, murderous, satanic desire" by arranging publicly unthinkable bargains and face-saving exits for power-crazed statesmen. So writes Charles Hill, a former speechwriter for Kissinger at the State Department in the 1970s and a top aide to his successor George Shultz, in his 2010 book "Grand Strategies: Literature, Statecraft, and World Order." At one point Hill likens Kissinger to the fallen angel Mammon in John Milton's "Paradise Lost," who counsels Satan's hosts to "adapt to the conditions of Hell" and "seek to prosper."

In a bit of gallows humor among diplomats, Kissinger has praised Hill's book for reviving "the classical ideal of statesmanship." Kissinger's own 2014 book "World Order" credits Hill with helping him to draft and edit that grim, instructive survey of the fraying fabric of national sovereignties and international law.

So why isn't Hill ever mentioned or even cited in the footnotes to Barry Gewen's recently published "The Inevitability of Tragedy: Henry Kissinger and His World," a new intellectual biography of the classical statesman par excellence? Why doesn't Gewen mention Gary Bass' widely respected "The Blood Telegram," which establishes Kissinger's gruesome complicity in the slaughter of tens of thousands of Bengalis by Pakistan in 1971?

Why doesn't Gewen acknowledge, even if only to rebut, Greg Grandin's "Kissinger's Shadow," or Bouthaina Shaban's "The Edge of the Precipice: Hafez al-Assad, Henry Kissinger, and the Remaking of the Modern Middle East," or Robert K. Brigham's "Reckless: Henry Kissinger and the Tragedy of Vietnam"? And why does Gewen mention only in passing, and perhaps only grudgingly, the two highest-profile book-length indictments of Kissinger: Christopher Hitchens' "The Trial of Henry Kissinger" and Seymour Hersh's "The Price of Power"?

The answers surely vary for each book and for each of many other well-documented and/or formal, legal indictments of Kissinger. But as I explain in "The Inevitability of Defending Henry Kissinger" for The New Republic, Gewen's book presents Kissinger's dark side in a highly selective, calculating and, yes, duplicitous manner that characterizes both Kissinger's diplomacy and Gewen's own work as book-review editor at the New York Times.

Gewen wants not so much to valorize Kissinger as to use him to wean naïve Americans of what both Kissinger the statesman and Gewen, his apologist, consider our Pollyanna-ish illusions about democracy and foreign policy. He rationalizes Kissinger's support for — and sometimes direct involvement in — American covert operations that prompted coups and other subversive moves against legitimately elected governments, including our own: Kissinger remained Richard Nixon's secretary of state and his close confidant throughout a domestic covert operation known as Watergate.

Gewen has also written that in the Iraq war fiasco, Kissinger would have preferred replacing Saddam Hussein with another strongman such as Egypt's Hosni Mubarak. "Abetting a coup against an elected government is no one's idea of a happy ending," Gewen wrote in a 2008 review of Charles Ferguson's "No End In Sight: Iraq's Descent into Chaos," speculating about how to salvage something viable from that war, which Gewen had supported, not least by assigning and editing several Times reviews of books on it, as I've shown in The Nation and now, again, in The New Republic.

Gewen's own 2008 review of the Iraq debacle concludes with a former UN ambassador's observation that "If you are a military officer looking at this political class unable to make basic decisions ... the temptation must be great to think you can't do it any worse."

All of which suggests why Gewen's estimation of Kissinger in "The Inevitability of Tragedy" inclines me to think of the new Israel/Emirates deal as a Kissinger-style coup against President Mahmoud Abbas and the Palestinian Authority on the West Bank — even though the PA isn't really a sovereign state, and even though Kissinger, who's long retired from public office, isn't officially involved. But I do imagine him involved in advice-giving: Again, all those visits to the White House aren't just photo-ops. And Gewen's way of handling Kissinger mirrors Kissinger's "Now you see it, now you don't" way of doing things.

It also reflects Gewen's own transition from left to right — from his beginnings as a democratic-socialist doctoral student of labor history and a writer of speeches, congressional testimony and reports for the International Ladies Garment Workers Union to his intellectual and political conversion, especially after 9/11, to the more-Satanic, Kissingerian understanding of realpolitik that has driven him to write this book. Like some other rightward-tacking former Democrats, Gewen retains some of his pro-labor union views. But lacking direct experience in foreign policy councils, he has imagined and read his way into them. He has internalized and, in his editing and writing for the Times Book Review, promoted Kissingerian realpolitik, with all its diplomatic duplicity. The problem here is that supposedly omniscient, hard-headed diplomats and the statesmen whom they advise are no less prone to disastrous miscalculations than the sometimes-wild democratic polities that sometimes wisely reject them.

Yet the democracy-disdaining Gewen often determines which nonfiction books about politics and history the Book Review will assign, and what reviewers it will choose to make or break those books' credibility in Times readers' minds, and in the publishing industry's mindless, tasteless gyrations.

No wonder that nearly anyone who wants to get a book reviewed by the Times has praised or been silent about Gewen's "Inevitability of Tragedy." He has every right to promote Kissinger's worldview there and in his own bylined essays and reviews, but not, I argue, in assigning and editing reviews by others, including several he has edited by Kissinger himself.

Gewen and his Times colleagues insist that all their assignments are made collectively and collegially. If you believe that, you'll believe his assertions that Kissinger is mainly a morally grounded American patriot who wants to protect our democracy from its own excesses. And you'll have to ignore Gewen's suggestion in 2017, which I cite in my review, that foreign policy strategists who consider working for Donald Trump should emulate Kissinger's thinking as he was deciding to work for Richard Nixon.

At 97, Kissinger is too old to consider working for Trump, but he's not too old to have considered advising him in making foreign policy, such as the U.S.-brokered Israel/Emirates deal. And I see no reason to think more of that advice than I do of the more than half-crazed foreign policy maneuvers that even Gewen acknowledges offer "numerous lessons" in Henry Kissinger's contributions to American decline.