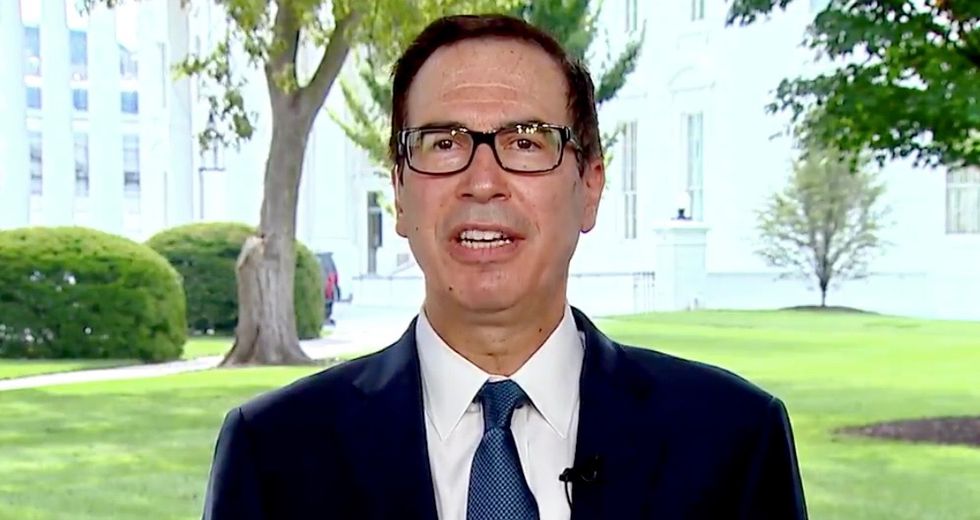 "Inflicting suffering on tens of millions of Americans by cutting unemployment benefits because of an anecdotal 'some cases' argument that has been refuted again and again is a stupid way to make policy."

Treasury Secretary Steve Mnuchin on Sunday recycled a debunked right-wing talking point to justify the GOP's proposal to cut by more than half the $600-per-week federal boost in unemployment benefits that expired at the end of last week, depriving around 30 million Americans of a key economic lifeline as joblessness remains at historic levels.

In an appearance on ABC's "This Week," Mnuchin claimed "there's no question" that the $600 weekly boost in unemployment insurance (UI) created a disincentive to work.

"The Trump administration loves socialism for the rich, unfettered capitalism for everyone else."

When host Martha Raddatz pointed to a recent Yale study that found "no evidence that more generous benefits disincentivized work," Mnuchin responded, "I went to Yale, I agree on certain things, I don't always agree."

As a counterpoint, the Treasury Secretary cited a "Chicago study"—apparently referring to May research from the University of Chicago showing that under the $600-per-week boost, 68% of unemployed workers who were eligible for UI could have received benefits that exceeded their previous work income. That study, however, did not examine whether the benefits created a disincentive for the unemployed to seek work.

"There are cases where people are overpaid," said Mnuchin, a former Goldman Sachs banker whose net worth is estimated to be around $400 million.

The $600 weekly payment amounts to around what a worker would earn working 40 hours per week at a $15-an-hour wage. The fact that some workers earned more under the enhanced unemployment benefits than they did from their jobs makes the case for raising wages, not cutting benefits, progressives have argued.

Senate Republicans have proposed cutting the $600 weekly boost to $200—which would amount a $1,600 monthly benefit cut for tens of millions of people.

Treasury Secretary Mnuchin tells @MarthaRaddatz “there’s no question” that $600 unemployment insurance is a disince… https://t.co/s0kW5zuD2r
— This Week (@This Week)1596374814.0

In response to Mnuchin's remarks, Rep. Don Beyer (D-Va.) tweeted that "inflicting suffering on tens of millions of Americans by cutting unemployment benefits because of an anecdotal 'some cases' argument that has been refuted again and again by studies of actual data is a stupid way to make policy."

Sen. Bernie Sanders (I-Vt.) slammed Mnuchin for wanting to to "slash $600 a week in unemployment benefits for 30 million workers who lost jobs" while supporting "the continuation of a $500 billion slush fund for corporations."

"The Trump administration loves socialism for the rich, unfettered capitalism for everyone else," said Sanders.

The $600-per-week increase in unemployment benefits expired on Friday as Republican and Democratic negotiators failed to reach an agreement to extend the payments—even amid dire warnings that a lapse could lead to a surge in evictions, increased hunger, and massive job loss.

Mnuchin on Sunday touted the White House's offer of a one-week extension of the $600 payments, but Democratic congressional leaders and other critics dismissed the proposal as a "sham" given that it would likely take weeks for states to distribute the payments.

"They proposed it after it was too late to prevent a benefits lapse," tweeted HuffPost's Arthur Delaney. "The last checks had already gone out. State workforce agencies have thoroughly demonstrated they don't do policy changes on a dime. Republicans opposed the $600 from before anyone received their first check and they made sure the benefits stopped."

Democratic leaders met with Mnuchin and White House Chief of Staff Mark Meadows on Saturday for a rare weekend discussion as the two sides remain far apart on key priorities for the next Covid-19 stimulus package, from unemployment benefits to additional aid for state and local governments.

In a Dear Colleague letter on Saturday, House Speaker Nancy Pelosi (D-Calif.) described the weekend meeting as "more productive than our previous discussions" but added that no agreement was reached.

"This is a very different kind of negotiation, because of what is at stake," Pelosi wrote. "Millions of children are food insecure, millions of families are at risk of eviction, and for the nineteenth straight week, over one million Americans applied for unemployment insurance... All parties must understand the gravity of the situation in order to reach an agreement that protects Americans' lives, livelihoods, and the life of our democracy."