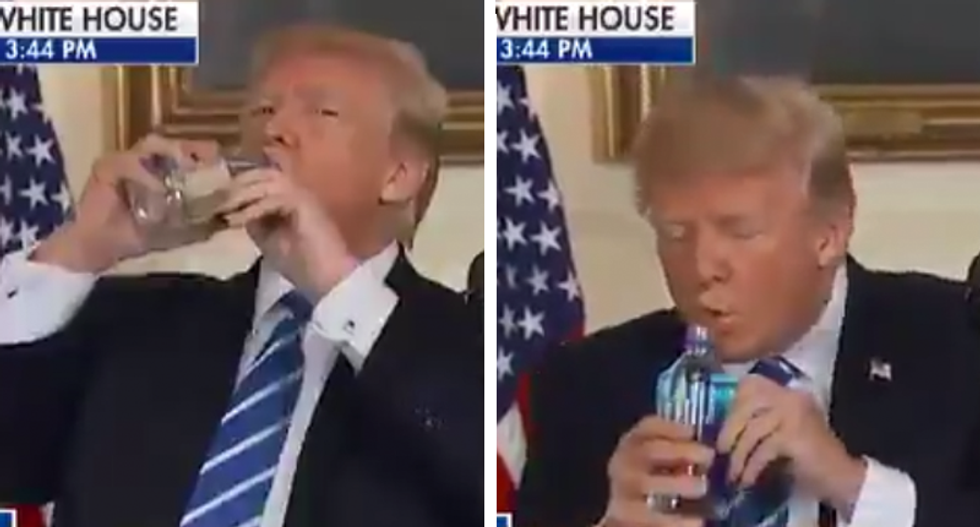 Speaking to her closing Wednesday panel with Jason Johnson and Howard Fineman, Reid showed a super-cut of Trump's knack for getting words wrong, not knowing how to pronounce simple things, slurring his words, stumbling down the stairs, not knowing where to go, dragging his feet and more.

"Well, you know, my pretext for all my students this fall will be: person, woman, man, camera, tv, and if they can do that, I know they're at least as smart as the president," joked Johnson. "Here's the thing. Joe Biden demonstrated that he literally can ride a bike and do something else at the same time. Like, I have always thought the argument that Joe Biden has lost a step or has some sort of mental deficiency was a complete lie. It's Republicans just projecting. What's important to remember is that no matter how much they spout this nonsense, every single time Donald Trump opens his mouth, he looks worse. There is nothing Joe Biden can say that is more foolish or incoherent than Donald Trump in the middle of a substantive interview."

Reid explained that every time Trump or his sons attempt to attack Biden, "it just calls more attention to the times when he slurs his words, to the weird little bruise thing that was on his hand and people were talking about, 'what is that,' to the way he was dragging his foot when he was walking. He keeps calling his attention to what he thinks is bad attention to Joe Biden, but those things just seem to call more bad attention to him."

Fineman agreed, telling a story about teaching at the University of Pennsylvania and inviting Biden into his class.

"He just blew the doors off the thing," said Fineman. "And these kids responded to him and to his force of intellect and passion in a way that surprised me. And he said at the end to them as he was on his way out the door, he said, 'Look, you 25 kids, you are at an ivy league school, but don't think you can isolate yourself from the changes in America and your responsibility to deal with it. You can't build a wall high enough. You can't make enough money. You can't do anything to avoid your responsibility to embrace America.' And I think by picking Kamala Harris, he showed that.