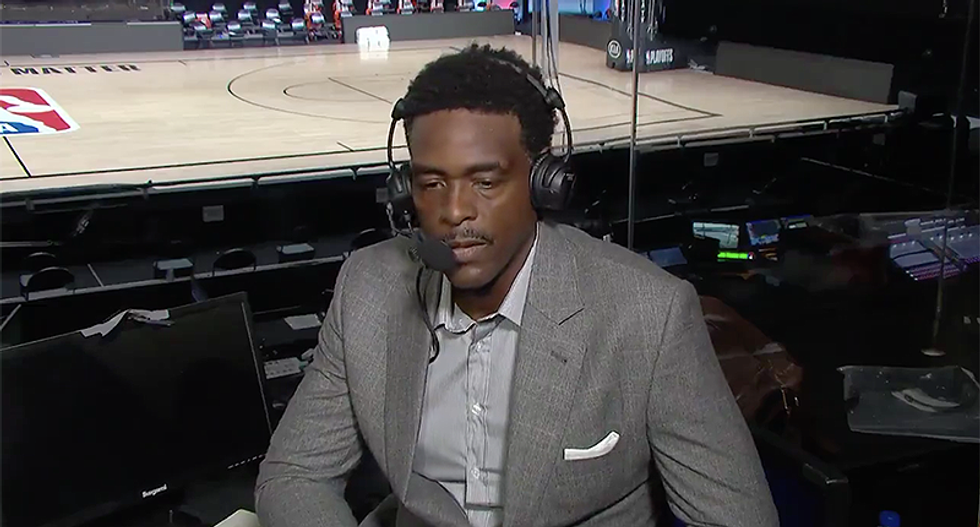 Five-time NBA All-Star player Chris Webber fought back tears when speaking about the NBA players' strike Wednesday evening in the wake of the Jacob Blake shooting.

The moment came a few hours after the news that all three games were being boycotted. NBA on TNT went live to players to hear their take on the protest.

Webber said that he wanted his voice to be heard since there were only a few of the same voices talking.

"I keep hearing about next steps, next steps. I don't really care what the next steps are because the first steps are to garner attention," he said. "They have everybody's attention around the world now. We know it won't end tomorrow. We know there have been a million marches, and nothing will change tomorrow. We keep hearing vote. 'Everybody vote.' But I'm here to speak for those who are always marginalized. Those that live in these neighborhoods, and we tell them to vote, and then we just walk away."

He went on to talk about what it was like when Charles Barkley came to speak at his high school.

"You can't be something until you can see it," said Webber, describing what it did to encourage him.

"If not, now when? If not during a pandemic, when countless lives are being lost -- if not now when?" Webber continued. "We know nothing is going to change. We get it. Martin Luther King Jr. got shot and risked his life. Medgar Evers. We've seen this -- all of our heroes constantly taken down. We understand it's not going to end. But that does not mean young men, that you don't do anything. Don't listen to these people telling you, 'Don't do anything because it's not going to end right away.' You are starting something for the next generation and the next generation to take over. Do you have to be smart? Yes. Do you have to make sure you have a plan? Yes. Do you have to be articulate about that plan? Yes. All of those things."

He closed by saying it was the young people leading the way, and he applauds them.

A Chinese spy balloon that's been drifting through U.S. airspace for days was shot down off the Carolina coast Saturday afternoon, the New York Times reported.

The balloon had spent five days floating from Idaho to the Carolinas, sparking a diplomatic incident between the U.S. and China and a huge political debate in which many Republicans demanded President Joe Biden act – with many encouraging civilians to shoot it down themselves.