'Would be comical if it didn't involve real lives': Trump interview spotlights deadly failure of his COVID-19 response 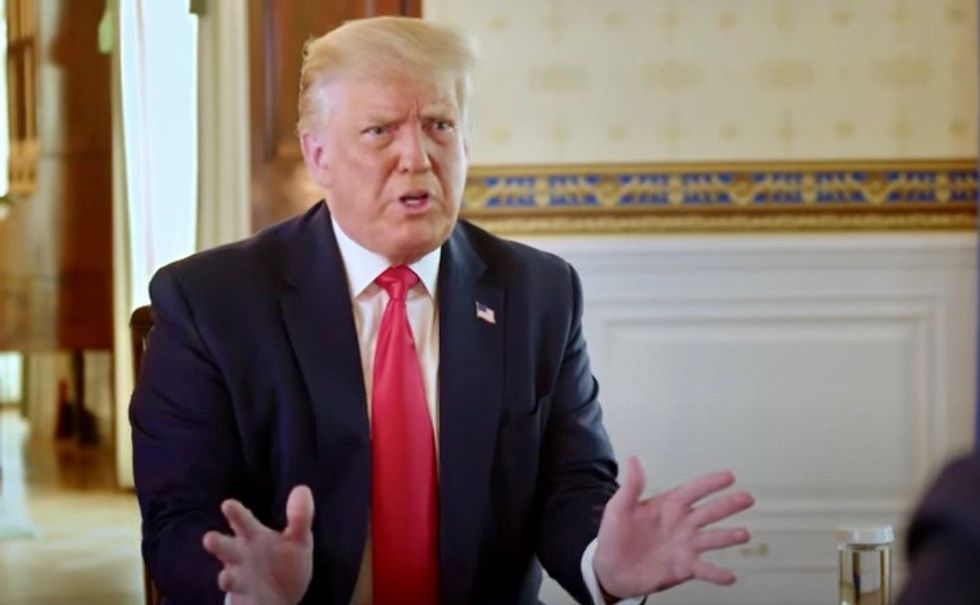 "If you wrote this as grotesque farce" for a movie script, wrote actor and progressive activist John Cusack, "no one would believe it."

In an interview with Jonathan Swan of Axios that aired late Monday, President Donald Trump sputtered, declared "You can't do that," and continued trying to downplay the massive and rising coronavirus death toll when confronted with the fact the U.S. has a higher mortality rate by percentage of population than major countries like South Korea and Germany.

"It's crushing to watch the president sift through printed out graphs that somehow spin the U.S. response he has presided over as anything other than a national humiliation."

While many observers ridiculed Trump's unhinged performance and likened the Axios interview to an episode of the HBO comedy show "Veep," Slate's Elliot Hannon wrote Tuesday morning that the president's back-and-forth with Swan "would be comical, if it didn't involve real lives."

"Instead, it's crushing," Hannon added. "It's crushing to watch the president sift through printed out graphs that somehow spin the U.S. response he has presided over as anything other than a national humiliation."

After Swan noted that U.S. coronavirus deaths are on the rise, Trump brandished several colorful print-out charts purporting to show that the U.S. death rate as a percentage of cases is lower than that of other nations.

Swan insisted that it's "surely a relevant statistic say if the U.S. has X population and X percentage of death of that population vs. South Korea."

In response, Trump suggested that South Korea may be distorting its coronavirus statistics and falsely claimed that the U.S. only has more Covid-19 cases because it tests more than other countries.

The clip of the exchange, which was filmed on July 28, quickly went viral on social media, with critics voicing alarm and disgust at Trump's ignorance and politically motivated efforts to downplay the severity of a pandemic that has killed more than 155,000 people in the U.S.

"If you wrote this as grotesque farce" for a movie script, wrote actor and progressive activist John Cusack, "no one would believe it."

Rob Flaherty, digital director for Joe Biden's presidential campaign, tweeted that "you really gotta step back realize that as one thousand Americans die per day, the White House is printing out kindergarten charts for the president to prove that things are actually great."