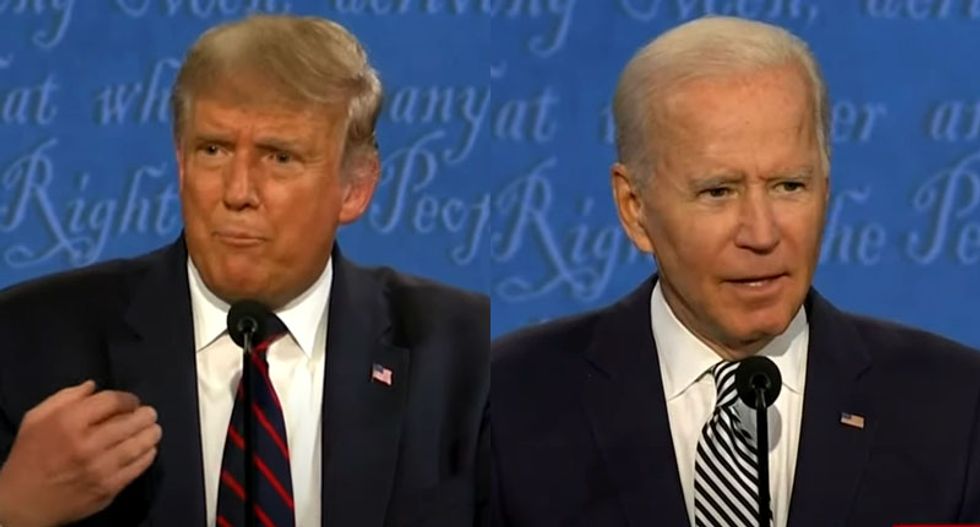 Years ago, when I was a high school sophomore, at the beginning of the academic year one of our teachers gave us an assignment to come up with ideas to reform the American political system.

Dutiful wonk that I was even then, I came up with my list of serious, thoughtful changes not all that different from a lot of what we’re still debating today—abolishing the Electoral College, an end to gerrymandering, making voter registration automatic, etc.

A friend and classmate, more sharp-witted than I, chose the satirical route instead, and to the horror of our teacher came up with a spot-on takedown of modern government, a parody of contemporary politics.

As I recall, her report ended with the presidential election being determined by a mud wrestling match in Madison Square Garden. It made more sense and possessed more dignity and class than the  horror show that unfurled before the world Tuesday night in what laughingly was billed as the first debate between President Donald Trump and Democratic challenger Joe Biden.

Just minutes in, Trump turned it into a travesty; bellowing, repeatedly interrupting and talking out of turn, lying, pigheadedly violating the agreements carefully worked out by the official Commission on Presidential Debates and both campaign staffs for a proper discussion of policy. At a time when we’re desperate for rational solutions, Trump was the proverbial bull in the china shop of democracy, and when he was done there was barely a piece of porcelain left intact. He acted as if this was one of his rallies, God help us, playing to our lowest animal instincts and insulting our intelligence.

Throughout his life and so-called career, Trump has always insisted that rules are for suckers and don’t apply to him—he can shoot a person on Fifth Avenue, grab a woman by her genitals, refuse to pay his millions of debt—and last night was no exception. By all accounts, what happened Tuesday is what he planned all along. Maybe it satisfied his bloodthirsty, delusional base, stewing in a toxic soup of Fox News and QAnon conspiracies, but for most of us it was one more manifestation of the tragedy imposed on the nation—and the world—by a megalomaniac with nary a scruple or a scintilla of human kindness.

Behind in the polls, perhaps it was an act of desperation on his part, as some have suggested, a ploy to make Biden seem weak. If so, it backfired miserably and was just a further demonstration of why he is the worst president in the history of the United States—and we’ve had some beauts. Unfit for office, corrupt, delusional: a real triple threat. He must not receive a second term.

As many have noted, the lowest moment—the Badwater Basin at the bottom of a Death Valley-like rhetorical debacle—was Trump’s refusal to condemn white supremacy and issuing what essentially was a call-to-arms to the Proud Boys, the right-wing racist thugs who are welcomed by many Republicans, and who frequently show up at peaceful protests to taunt, incite and bust some heads. Trump’s people deny it’s what he meant but the fringe group already has made his “Stand Back and Stand By” a new battle cry.

Further, when moderator Chris Wallace asked Trump if  he would “urge your supporters to stay calm during this extended period [of ballot-counting], not to engage in any civil unrest,” Trump refused and said, “I’m urging my supporters to go into the polls and watch very carefully because that’s what has to happen. I am urging them to do it.” With that kind of encouragement, harassment on Election Day could make the 2000 Brooks Brothers riot look like a tea dance. Advice: Don’t watch that movie The Purge or any of its sequels between now and the resolution of this election; it's a little too close to the bone right now.

Washington Post national correspondent Philip Bump writes, “What Trump is obviously encouraging is to poll watching what armed militias are to police: self-appointed experts whose priority is less keeping order than confronting perceived enemies. It wasn’t the first time that Trump had similarly called on his supporters to serve in that capacity, but it was probably the call that had the largest audience.” Very scary stuff.

In the end, few, if any, minds were changed Tuesday night: as Republican analyst Mike Murphy succinctly said post-debate on MSNBC, “Men are split on Trump and women hate him.” Those against him may have been galvanized  by the president’s rants to work even harder to get out the vote, an excellent thing, but others may have been so turned off by this Hindenburg explosion of an evening that they won’t cast a ballot at all. What does this one-man riot tell them about our political system? And as for the next Biden-Trump debates, who’s going to want to watch? I live in Manhattan; if I want that kind of twisted human turbulence, I can walk around my block a couple of times and get it out of my system.

For me, perhaps one of the defining moments came when Trump had launched into another incoherent harangue about Biden’s son Hunter and then falsely claimed that his own children had “lost a fortune… by coming down and helping us with governance.” Biden replied—addressing the camera in the way that was his safe haven several times during this melee—“This is not about my family or his family. It's about your family, the American people… You, the American people, it's about you. That's what we're talking about here.”

Would that it was so. Right now at least, our American family is dysfunctional, led by a power mad liar. And almost half our relations have lost their ever-loving collective minds.

Bring on my high school pal’s mud wrestling idea; it’s nowhere near as filthy or frightening as this national meltdown.