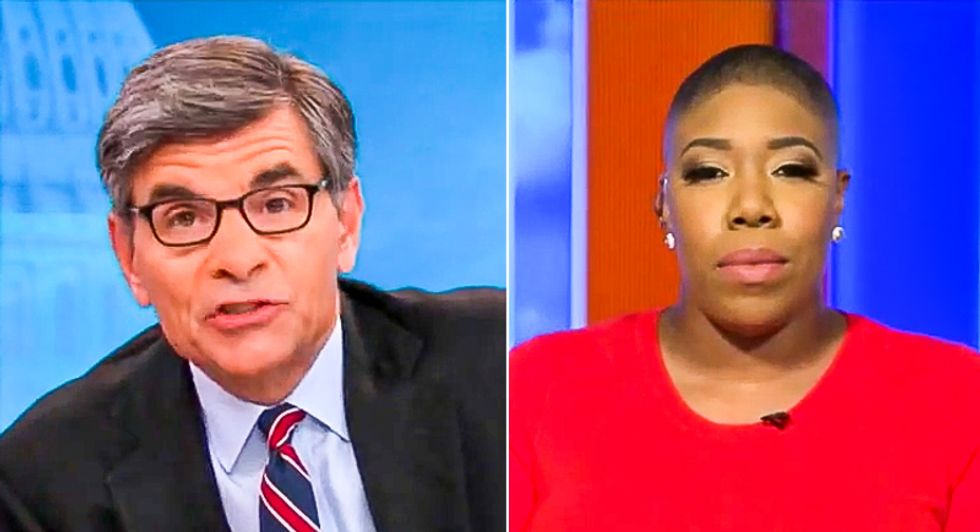 ABC host George Stephanopoulos grilled Symone Sanders, a surrogate for Democratic nominee Joe Biden, about why the former vice president did not do more to stop the coronavirus pandemic even though he was not in office at the time.

Following an interview in which he gave Trump campaign adviser Jason Miller little pushback, Stephanopoulos told Sanders that Biden did not have a "significantly different response" from President Donald Trump.

"Can you point to statements in January and February where the vice president called for travel bans, social distancing, wearing masks?" Stephanopoulos wondered.

"I can do you one better," Sanders replied. "In October 2019, Vice President Biden warned that we were susceptible and vulnerable to a pandemic. In January of 2020, he wrote an op-ed that warned and cautioned that Donald Trump should take this seriously. On March 12, he put out his plan for a COVID-19 response that spoke of widespread testing, making sure everyone had the proper personal protective equipment, that called for operationalizing the Defense Production Act."

Sanders added: "While Vice President Biden was doing all this public urging and President Trump was speaking privately to at least one reporter saying that he knew the virus was deadly."

At that point, the ABC host interrupted.

"I asked you about January and February," Stephanopoulos said. "You said in March the vice president put out a plan, but he also put out a tweet that day saying a wall will not stop the coronavirus, banning all travel from Europe or any other part of the world will not stop it."

"He didn't explicitly call for travel bans or social distancing or wearing masks," the host pressed.

"Donald Trump had information that could have made a difference," Sanders concluded.