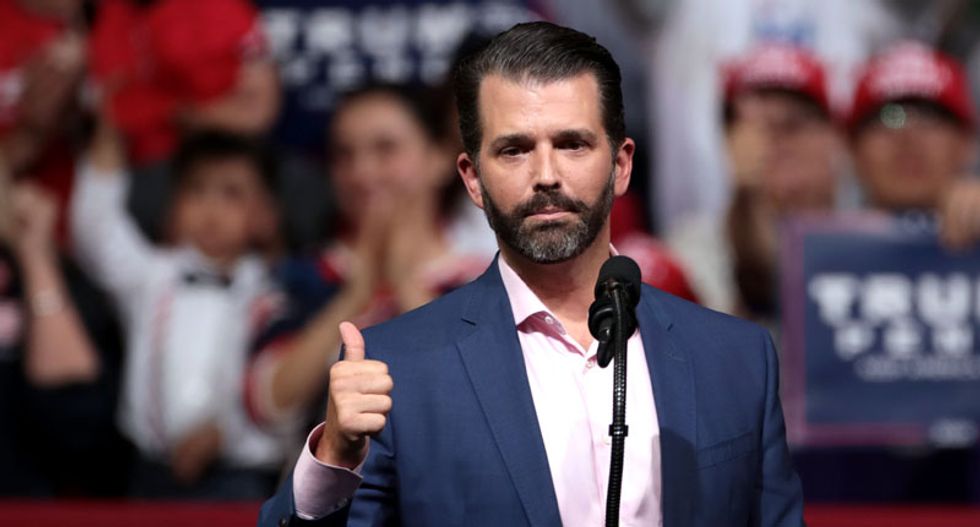 The president's son, Donald Trump Jr., appears in a social media video ad asking people to join an "army" to stop the "radical left" and their plan to "steal" the election. Nevermind, that Trump Sr. has already refused to ensure a peaceful transfer of power if he loses and has also said he can only lose if the vote is rigged.

Here's the ad itself:

"The radical left are laying the groundwork to steal this election from my father, President Donald Trump. They are planting stories that President Trump will have a landslide lead on election night but will lose when they finish counting the mail-in ballots. Their plan is to add millions of fraudulent ballots that can cancel your vote and overturn the election. We cannot let that happen."

"We need every able-bodied man and woman to join Army for Trump's election security operation at defendyourballot.com. We need you to help us watch them, not just on Election Day but also during early voting and at the counting boards. President Trump is going to win. Don't let them steal it. Go to defendyourballot.com and enlist today."

These posts, by a president’s son, should rank among the most worrisome threats to American democracy in our histor… https://t.co/C7Q0LR7TgD
— Garrett M. Graff (@Garrett M. Graff)1601059754.0

While the actual website DefendYourBallot.com is just a Trump campaign get out the vote effort that doesn't actually instruct supporters to monitor polling places or post offices, one tech culture website said the "ads incite armed militias to intimidate voters." Keep in mind, Trump Sr. has already promised to deploy thousands of law enforcement officials to polling places on Election Day, a move that will discourage voting by people with a distrust of police.

Considering the numerous armed protesters at anti-lockdown rallies during the start of the COVID-19 epidemic and Trump Sr.'s repeated lie that Democrats want to abolish the 2nd Amendment right to bear arms, it's easy to see how Donald Jr.'s appeal could inspire right-wing gun nuts to "monitor" polling places and post offices by scaring voters, poll workers, and postal delivery people by challenging anything that looks even remotely suspicious to them.