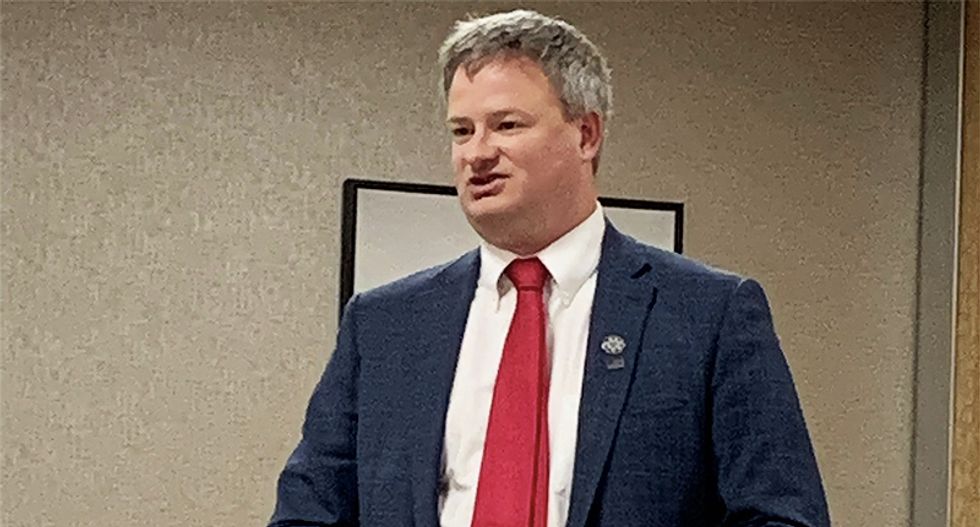 South Dakota Republican Attorney General Jason Ravnsborg now says he is the one who discovered the body of 55-year old Joseph Boever, who had been walking along the highway Saturday night when Ravnsborg struck and killed him.

Ravnsborg now says in a statement released Tuesday, "I discovered the body."

Governor Kristi Noem, also a Republican, left vital details out of her announcement Sunday evening, including that Ravnsborg had first reported to the police he had struck a deer, and that he was the one who discovered the body.

Ravnsborg was on his way home from a Republican fundraising dinner when he hit and killed Boever. The fundraiser included a raffle for a MAGA “.45 Trump handgun,” the GOP group announced.

The Rapid City Journal reports Ravnsborg "said in a statement Monday night that he and the local sheriff searched a crash scene after he thought he hit a deer Saturday night but they both missed spotting the pedestrian he had hit and killed."

Ravnsborg, who been cited for speeding six times in four years, "said he used Hyde County Sheriff Mike Volek’s personal vehicle to drive home to Pierre and then returned it to Highmore the next day."

There are some seemingly curious actions.

"Instead of calling 911 Ravnsborg drove to Volek’s house 'to report the discovery,' leaving Boever on the side of the highway where he had been since 10:30 p.m. the night before."

Ravnsborg's statement was "written on the letterhead of the Office of Attorney General and sent from his campaign email address."

One local opinion columnist shared some harsh words about the attorney general and the governor.

"Every step since then taken by Jason Ravnsborg and the state Republican party, including Gov. Kristi Noem, has been to cover Ravnsborg's rear end."