'Beyond suspect': States warn DeJoy-led Postal Service is sending misinformation about voting to millions of Americans 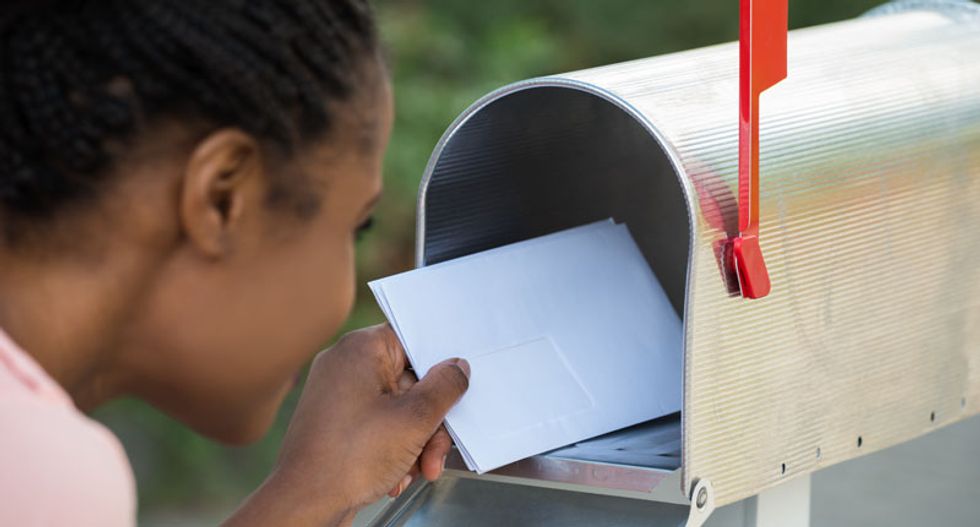 Officials in Colorado, California, and Washington state on Friday were forced to publicly clarify local election procedures and guidelines after the U.S. Postal Service began sending out mailers containing potentially misleading information about the voting process to households across the country.

In a series of tweets late Friday, Colorado Secretary of State Jena Griswold raised alarm about the USPS postcard, which includes a checklist advising voters to request mail-in ballots "at least 15 days before Election Day."

"I just found out the USPS is sending this postcard to every household and PO Box in the nation. For states like Colorado where we send ballots to all voters, the information is not just confusing, it's WRONG," Griswold tweeted, posting a photo of the mailer. "Here in Colorado (and also in CA, DC, HI, NJ, NV, OR, UT, WA, and VT) voters don't request ballots because a ballot is mailed to every registered voter. But the USPS is confusing our voters by telling them to request a ballot."

Griswold, a Democrat, said Postmaster General Louis DeJoy "refused" when secretaries of state asked to review a draft of the postcard before it was sent to millions of U.S. voters.

"This may have started off as a well-intentioned effort by USPS, but their refusal to listen to election experts combined with the recent postal slowdown in some parts of the country is beyond suspect," added Griswold, who said she is exploring legal action against the Postal Service. "Confusing voters about mail ballots in the middle of a pandemic is unacceptable. It can undermine confidence in the election and suppress votes. I will do everything in my power to stop USPS from sending misinformation to voters."

Other state officials also took to Twitter and issued statements reminding residents of the mail-in voting process in response to the USPS postcard, which mentions that "rules and dates vary by state" before offering specific timelines on requesting and sending ballots—advice that could be helpful in some states but misleading in others.

"Appreciate the effort USPS, but this could be confusing for California," tweeted California Chief Deputy Secretary of State James Schwab.

In an attempt to prevent confusion, Janna Haynes, a Sacramento County elections spokesperson, released a statement reminding residents that "in California, you do not need to request an absentee ballot—all active and registered voters will be mailed a ballot beginning October 5."

Washington state's Republican Secretary of State Kim Wyman also put out a press release noting that "voters in Washington do not need to request a ballot, as ballots are automatically mailed to all registered voters at least 18 days prior to Election Day."

"The Office of the Secretary of State and county election officials were not made aware this mailer would be sent to Washington residents, nor were we apprised of its content," said Wyman, echoing Griswold's account. "By the time we learned of the mailer and reached out to the postal service to inquire further, the mailers were already in the mail stream."

The mailers were sent as part of broader election "advertising" effort that comes as DeJoy and other top Postal Service officials are facing accusations of deliberately undermining mail-in voting to help President Donald Trump win reelection. DeJoy, a Trump megadonor, imposed changes on USPS operations that resulted in dramatic mail slowdowns across the nation, sparking concerns about the timely delivery of mail-in ballots.

As the New York Times reported, the Postal Service is working to reassure voters and state officials that it is "prepared to handle an expected surge in voting by mail as a result of the pandemic."

"The agency has reached out to political party and campaign officials in all 50 states and designated more than 400 'political and election mail coordinators,'" the Times noted. "And it has begun an advertising campaign, including a mailer to households across the country and a television spot. Mr. DeJoy is scheduled to meet next week with secretaries of state from across the country to offer guidance on voting-by-mail deadlines."

"The Postal Service recently warned states that it might not be able to process all last-minute ballots," the Times continued, "opening the possibility that hundreds of thousands could arrive too late to be counted."