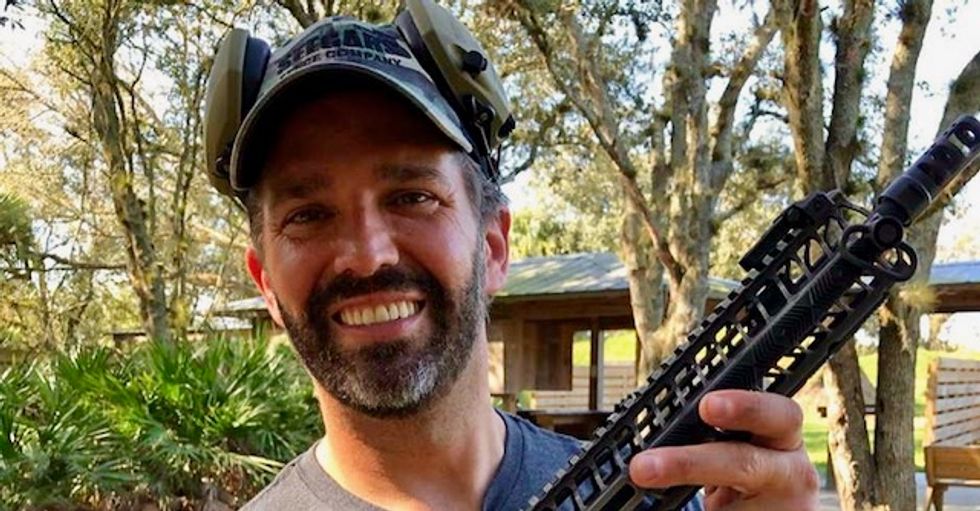 On Saturday, The New York Times profiled an Arizona campaign event headed by Donald Trump, Jr. — and noted the omnipresent conspiracy theories and paranoid falsehoods being spread at the event.

"Inside, around 500 chairs were lined up as tightly as airplane seats," reported Hank Stephenson. "When those filled up, hundreds more people crammed in, standing shoulder to shoulder. When the ballroom could hold no more, organizers swung open its double doors and urged attendees to just keep squeezing in. Only a handful wore masks. One man made the sign of the cross as he entered."

"Onstage, [Turning Point USA founder Charlie] Kirk, the younger Mr. Trump and his girlfriend, Kimberly Guilfoyle, offered up red meat to the crowd, much of it wildly exaggerated or without basis in fact," said the report. "They complained about the persecution of conservatives, bantered about the '96 genders' that they said Democrats now recognized, suggested that Mr. Biden has dementia, and claimed that Osama bin Laden had once endorsed Mr. Biden."

They also heavily implied that Democrats are in league with pedophiles — a central pillar of the QAnon conspiracy theory.

"'You know what the left is doing? They’re justifying 'Cuties,' they're justifying pedophilia,' Mr. Trump said, pointing to a recently passed law in California that aims to end discrimination against L.G.B.T.Q. young adults in statutory rape convictions," said the report. "Conspiracy theorists associated with the QAnon movement have claimed that the law favors pedophiles, which it does not."

According to the report, at least one Republican who attended the event, college student Jonathan Gross, was disappointed that everything had gone off the rails. “They were just throwing out a bunch of stuff, saying Joe Biden is basically brain-dead for having to read off a teleprompter, calling the left sheep, and that ‘Cuties’ argument,” said Gross. “I came to hear about what Trump is planning to do with his re-election, but it felt like just slander of the left.”