Donald Trump Jr.'s pre-debate appearance draws questions: 'How much coke did Don Jr. snort before that?' 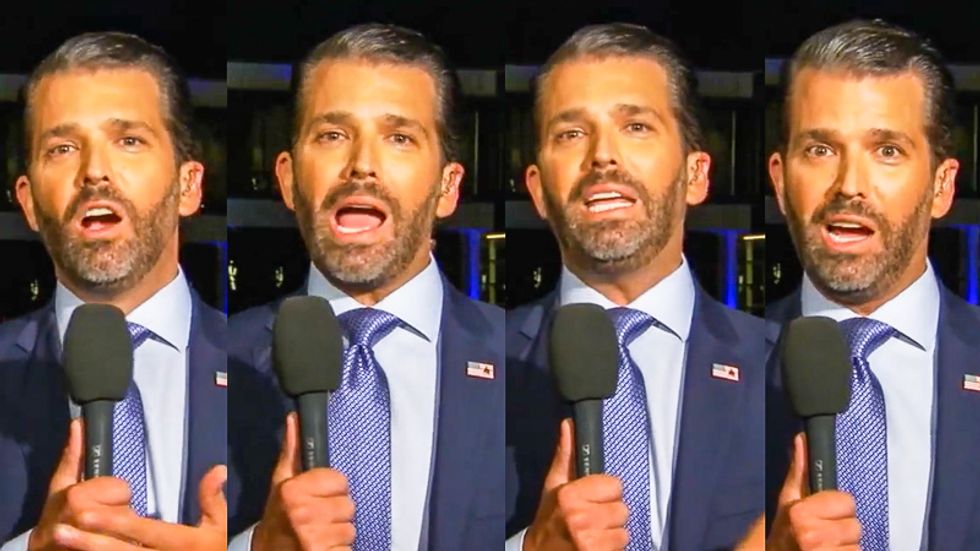 An excited performance by Donald Trump Jr. led to questions about drug use on Tuesday.

"I'm not so worried about the two hours of debate or the 90 minute debate, I'm worried about the other 22 hours of the day where Joe seems to struggle, where he's on a teleprompter," he ranted. "I mean, he hasn't had to campaign in the same way."

"I know people, honestly, George, running for first grade class president that have spent more time campaign than Joe Biden has for president of the United States," the president's son continued. "When you have a mainstream media that will sort of let him get away with that, to not answer questions, you know, so that's difficult."

He added: "So I think Joe Biden should do fine. He's been doing this for a very, very long time. This should be his happy place. So, we'll see what happens."

Is it just me or does it look like @DonaldJTrumpJr is on coke right now. #PresidentialDebate
— Dave Langer (@Dave Langer)1601425881.0

Why is coke face little Donald even speaking? How is he relevant? #cokehead #DonJr #DonJrIsAnAddict
— Elaine Warren (@Elaine Warren)1601425925.0

Omg how much coke did @DonaldJTrumpJr sniff tonight before going on the air Dude calm down. lol also, why is he eve… https://t.co/slDECIfV5S
— Jamie's Ramblings (@Jamie's Ramblings)1601425976.0