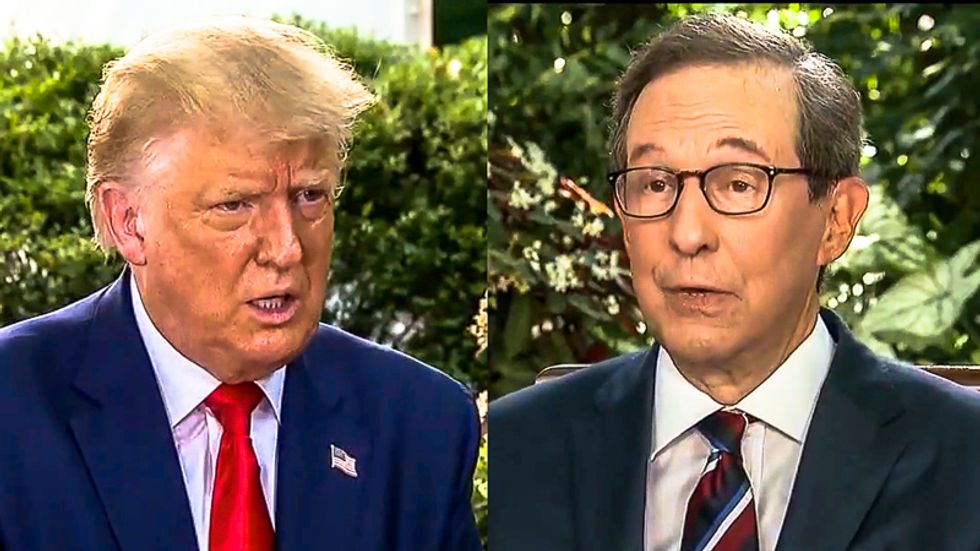 Chris Wallace, the Fox News anchor who will moderate the first presidential debate between Donald Trump and Joe Biden, is a veteran newsman who has a reputation for playing it straight at a network where the opinion hosts skew to the right.

Wallace, a youthful-looking 72 years old, is the son of legendary "60 Minutes" reporter Mike Wallace, who was known for his pugnacious interviews on the CBS show.

The younger Wallace may not be quite as combative as his late father, but he does not shy away from confrontation.

That includes taking on Trump at a Rupert Murdoch-owned news network that critics have accused of being a cheerleader for the Republican president.

In a one-on-one interview with Trump at the White House in July, the president boasted about passing a cognitive test with flying colors.

"Well, it's not the hardest test," Wallace responded, noting that one of the questions involved identifying a picture of an elephant.

He also fact-checked a false Trump claim about mortality rates from the coronavirus pandemic with the statement, "It's not true, sir."

Wallace will serve as the sole moderator for Tuesday's debate between the 74-year-old Trump and 77-year-old Biden at Case Western University in Cleveland, Ohio.

It is the first of three debates to be held ahead of the November 3 election.

Trump, speaking to Fox News Radio, said that while he has a "lot of respect" for Wallace, he was "willing to bet that he won't ask Biden tough questions."

"He'll ask me tough questions, and it'll show, it'll be unfair," Trump said. "He'll be controlled by the radical left."

The Fox News interviewer, Brian Kilmeade, pushed back against Trump's claim, saying that Wallace is "not controlled by anyone."

Born in Chicago on October 12, 1947, Wallace's parents separated when he was a child.

Wallace was raised by his mother and stepfather, former CBS News president Bill Leonard, and only got to know his father as a teenager following the accidental death of his older brother.

After graduating from Harvard University, Wallace went to work at The Boston Globe.

He joined NBC News in 1975 for what would be the start of a long and distinguished career in television news.

During his 13 years at NBC, Wallace covered the White House, anchored the NBC Nightly News and hosted the Sunday morning political talk show "Meet the Press."

He left NBC for rival ABC in 1989, where he hosted a show called "Primetime Thursday" as well as "Nightline."

A registered Democrat, Wallace moved to Fox in 2003 and became the host of the network's political chat show "Fox News Sunday."

In an interview with The New York Times published in June, Wallace was asked about the experience of working at Fox.

"Do I agree with some of the stuff I hear? Absolutely not," he said. "In the end, I have decided that what matters to me is what I am allowed to do.

"I've never been second-guessed on a guest I booked, a question I've asked," Wallace said. "I don't pull punches. I'm not playing favorites."

He served as moderator for one of the 2016 presidential debates between Trump and Democratic candidate Hillary Clinton, becoming the first Fox News anchor to do so and earning plaudits for his performance from both sides.

Wallace has received numerous awards over his career, including an Emmy Award for a tough 2018 interview with Vladimir Putin during which he notably asked the Russian leader about the untimely deaths of his political opponents.