'Don’t know the words': Donald and Melania Trump slammed for not being able to recite Pledge of Allegiance on 9/11 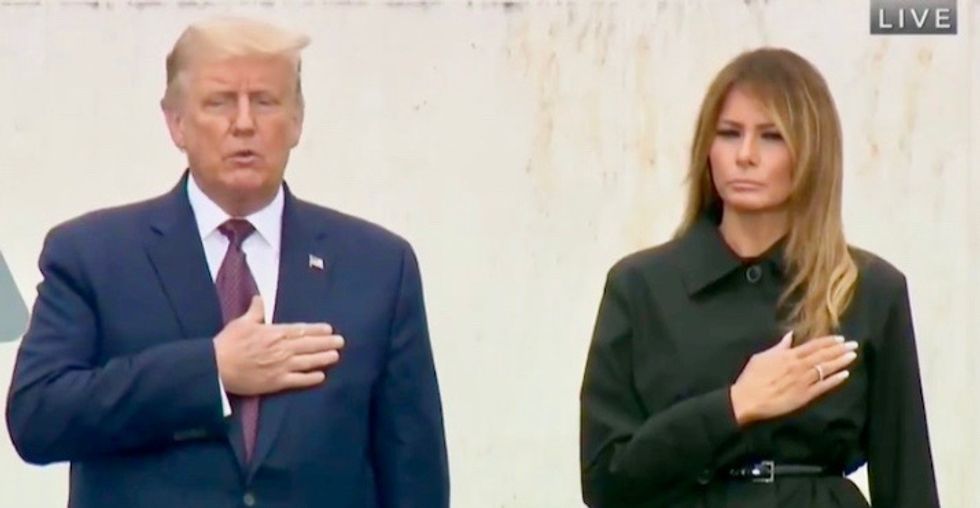 President Donald Trump and First Lady Melania Trump participated in a 9/11 remembrance ceremony at the Memorial in Shanksville, Pennsylvania. Both White House occupants were "clearly," as some noticed, unable to recite the Pledge of Allegiance.

President Trump recites the Pledge of Allegiance at this morning's 9/11 commemoration in Shanksville, PA. https://t.co/KZPWjai9ye
— The Recount (@The Recount) 1599832524.0

President Trump appeared to say some of the words but looked confused. The First Lady did not even attempt to recite the pledge.

@atrupar Him not seemingly knowing the words and FLOTUS not even bothering with them is pretty on brand for them. A… https://t.co/UQ4O9Op9q4
— Michael Koehler (@Michael Koehler) 1599835080.0

Between Trump & Melania, neither of them know the Pledge of Allegiance. Just say no, kids. @realDonaldTrump @FLOTUS https://t.co/dbfhEQUUbM
— NoelCaslerComedy (@NoelCaslerComedy) 1599834876.0

@atrupar Telling you, this should be a debate question. Mr. President, you have made kneeling during the anthem an… https://t.co/pTgEBtJUtk
— BobbyC (@BobbyC) 1599834904.0

@atrupar And how come his birther wife doesn't recite either. Isn't she proud to be an American? If this was Michel… https://t.co/JJvpqEECcD
— SheaCat (@SheaCat) 1599835057.0

The current occupants of the White House do not know the words to The Pledge of Allegiance of the United States - a… https://t.co/8j1lYVbYN8
— ☇RiotWomenn☇ (@☇RiotWomenn☇) 1599835024.0

@therecount How can we possibly have elected, and are considering re-electing a person who clearly has no idea how… https://t.co/DQr5nfrzm1
— Lively Blake (@Lively Blake) 1599836524.0