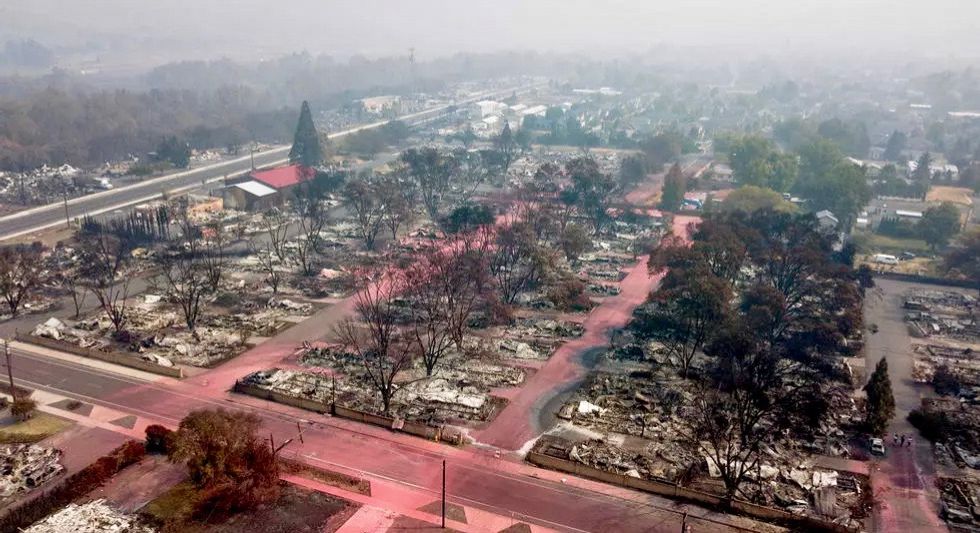 The Almeda Fire destroyed almost all of Talent Mobile Estates, a trailer park of about 100 wooden homes in in Talent, Oregon Robyn Beck AFP

Eraida Rodas surveyed the burnt-out wreckage of the wooden house where she had lived for 12 years with her husband and four children.

All that remained was the metal structure of the floor, the carcass of a child's bicycle and small deer statues.

An American flag which flew at the entrance was three-quarters burnt.

The rest of Talent Mobile Estates -- a trailer park in Talent, Oregon of about 100 wooden homes -- had mostly been swallowed by the so-called Almeda Fire, which raged for nearly a week, destroyed almost everything in its path, and killed three people.

Only a dozen dwellings, located along the road, were miraculously unscathed.

"I just feel like I lose, you know, all my family's efforts," the 37-year-old kindergarten teacher told AFP, sobs in her voice, adding that she felt "empty".

Fires up and down the US West Coast have charred more than five million acres (two million hectares), an area roughly the size of the state of New Jersey.

In Oregon, the Almeda Fire started on the morning of September 8 in Ashland to the south of Talent. Driven by strong winds, it spread about 20 kilometers (13 miles) north along the N5 highway.

When she heard about the fire in Ashford, Rodas and her family fled.

"When we left the park I remember that I looked back and I didn’t see, you know, hope. Because I was able to see the fire by the hills already," she said, pointing to the end of the site.

The fire was blocked by several hundred firefighters deployed to protect Medford, a nearby city. But it partly destroyed the town of Phoenix, as well as Talent.

The inferno had spared only some buildings and two churches.

She was staying in a hotel with her family, like many other evacuees from the area.

"I wish to come back to this place because it's the place that I've been living for a long time. And I really like the area. But nothing is the same after a disaster like this," she said.

Her family also faced financial uncertainty, because the mobile home was not insured.

She did not know if she was eligible for help from the state or federal government.

According to fire service spokesman Rich Tyler, about 42,000 people were victims of the fire, including those whose homes were damaged and others who had been evacuated or left without power.

Dozens of state employees had been deployed to restore water and electricity.

A man was charged Monday with starting a fire Wednesday night in Phoenix, the Jackson County prosecutor said Tuesday.

But the causes of the Almeda fire were still unknown and an investigation was underway, according to the sheriff.