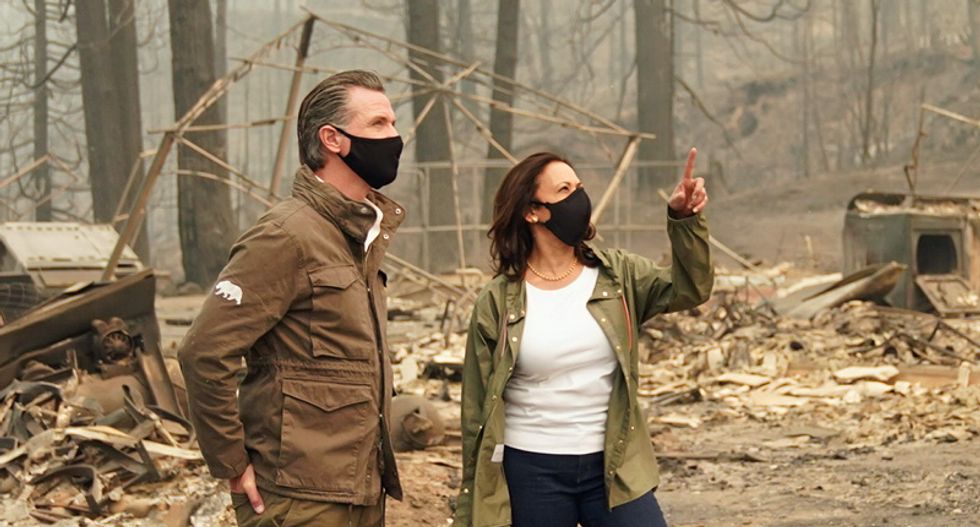 The terrifying wild fires battering the West Coast are bringing the issue of wildfires -- and climate change -- into the 2020 presidential race, The New York Times reported on Tuesday.

"The explosion of wildfires across the West has opened a new battleground in the critical competition for suburban voters between President Trump and Joseph R. Biden Jr., with growing evidence that climate change is an acute concern for many Americans, particularly women, viewing the nightly images of destruction and thick blankets of acrid air," Adam Nagourney and Shane Goldmacher reported.

"Mr. Trump has sought to combat his sharp decline among suburban voters by asserting that Democratic control of the White House would be a threat to the safety of the suburbs, raising the specter of crime, rioting and an 'invasion' of low-income housing that many view as seeking to stoke racist fears," the newspaper noted. "But Mr. Biden, the Democratic presidential nominee, is seeking to redefine what 'safety' means for an electorate swept by fear amid a pandemic, social unrest in the streets and now deadly wildfires. He is casting climate change as a more real and immediate threat to the suburbs than the violence portrayed in Mr. Trump’s ads and public remarks, seizing in a speech on Monday on the devastating fires ripping through forests, destroying homes and taking lives."

"The developments suggest that an issue that has always been on the sidelines in national presidential campaigns — and had seemed eclipsed this time by the pandemic and social unrest — may be coming to the forefront with only seven weeks until Election Day," the newspaper explained. "For at least some suburban voters, particularly those who live in the West, the threat of losing their homes to fire or the health risks to their families of skies clouded with smoke seem more immediate than the social unrest spotlighted by Mr. Trump in his speeches and advertisements."

Satellite image shows the impact of the smoke from the western wildfires across the US and into the Atlantic ocean… https://t.co/frOY6NELSL
— NWS Sacramento (@NWS Sacramento) 1600210828.0

"More broadly, the fires in the West — and Mr. Trump’s “it’ll start getting cooler, you just watch” disparagement of climate science during his visit to California — have reinforced the perception of the president as anti-science, particularly after his open skepticism toward experts advising him to act more aggressively against the Covid-19 pandemic," The Times reported.

Trump's battle to hold on to the suburbs: Biden wants to change the debate about safety from riots to wildfires.… https://t.co/3ZXJETxd2R
— adam nagourney (@adam nagourney) 1600210509.0