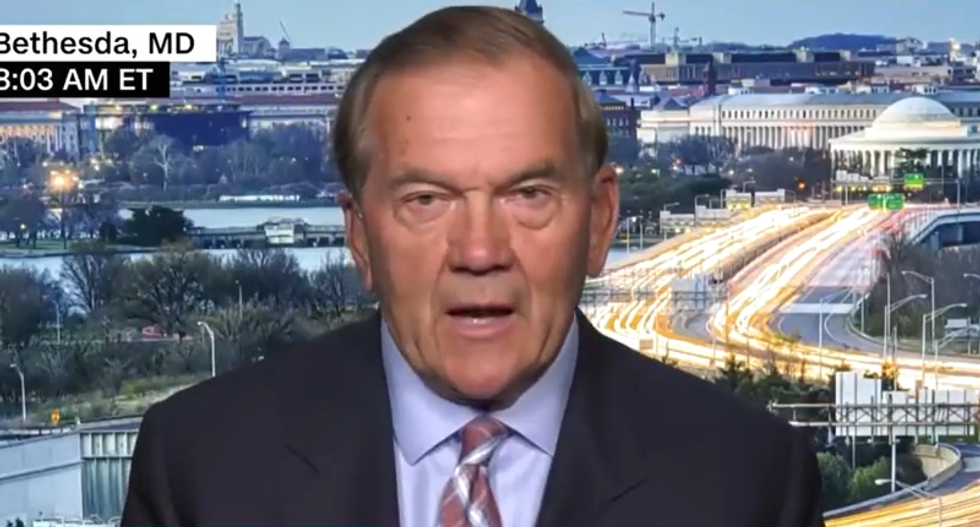 On CNN Monday, former Pennsylvania Republican governor and inaugural Homeland Security Secretary Tom Ridge — one of many Republicans who has come out in endorsement of Joe Biden — reacted with outrage to the bombshell New York Times report that President Donald Trump has paid virtually no taxes and papered over financial losses for years.

"The fact that he has paid $750 annually in income tax is revealing of many, many things," said Ridge. "Most of all, I think, it kind of reveals the lack of transparency, the lack of honesty, and his inability ultimately, I think, to connect with people who scramble, maybe two household incomes, scramble to pay $1,000 or two in taxes, and speaks to not only the lack of transparency but I think historically he's shown a tremendous lack of empathy and appreciation for those people who struggle with limited income. He certainly doesn't live the lifestyle of limited income, although he's paying taxes as if he has limited income, and professes to be different, but he has no empathy and no transparency there. That's probably more disturbing than anything else."

"That's why I brought it up," said anchor John Berman. "Again, you grew up in Erie. Pennsylvania has a lot of cities like Erie, where people struggle to get by and people pay their taxes ... the average tax filer pays $12,000 in taxes every year. It's a lot different. I think people in Pennsylvania might look at this and say, this is a lot different than what we're going through right now."

"I don't think anyone should be surprised with these revelations," said Ridge. "This man wanted to be president, never served in the military but thought prisoners of war lacked courage. A man, early on, mocked a journalist and more importantly mocked a journalist with a disability. This is a man who showed absolutely no appreciation whatsoever for the religious, racial and social diversity of America and wanted to be president, and it's been all downhill since then, and so is anybody surprised when we find out that he probably hasn't paid any taxes at all? Why are we surprised?"

Asked why he endorses Biden, Ridge continued to tear into Trump: "He's never appealed to the better angel of our natures. He hasn't rallied our humanity around this scourge of Mother Nature. If he put a mask on and held a press conference saying, the fury of Mother Nature is going to be on us shortly, let's work this out together, let's wear masks, let's do the social distancing. Leaders, leaders don't cut ribbons. Leaders respond and react in time of crisis. This is the first crisis he had and he hasn't led us through this at all."