Fox & Friends: Trump lying about pandemic is like FDR wanting to ‘calm America’ with fireside chats 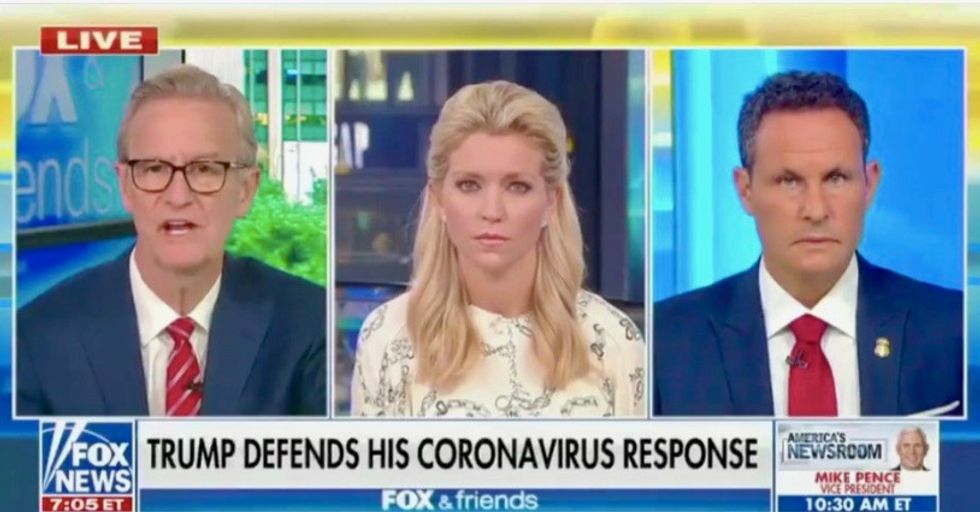 Fox News spent a good portion of its morning programming spinning the bombshell audio clips recorded by Watergate reporter Bob Woodward of President Donald Trump admitting he knew just how dangerous and deadly the coronavirus is, knew as far back as January, yet lied to the American people and continues to do so today.

About 1.7 million "Fox & Friends" viewers were told that President Trump is just like President Franklin Delano Roosevelt, wanting to "calm America" with his famous fireside chats – because at one point during his 18 interviews with Woodward Trump claimed he was lying to America because he did not want to "panic" people.

There is a difference between urging calm and lying with deadly results. And Trump, on tape, admits he “wanted to always play it down.”

“I still like playing it down, because I don’t want to create a panic,” Trump told Woodward.

"The President said he did not want to freak people out he wanted to keep people calm during this time of great national uncertainty," Fox News' Steve Doocy told viewers the morning after clips of Trump lying were published.

"Think about it. During the Depression, it was FDR who had his fireside chats to calm America. You look at something that President Obama tweeted out on March 4. And he had the same message as President Trump about, calm down."