Fox News host to Mike Pence: 'Which is it, a totally fake news story or illegally obtained documents?' 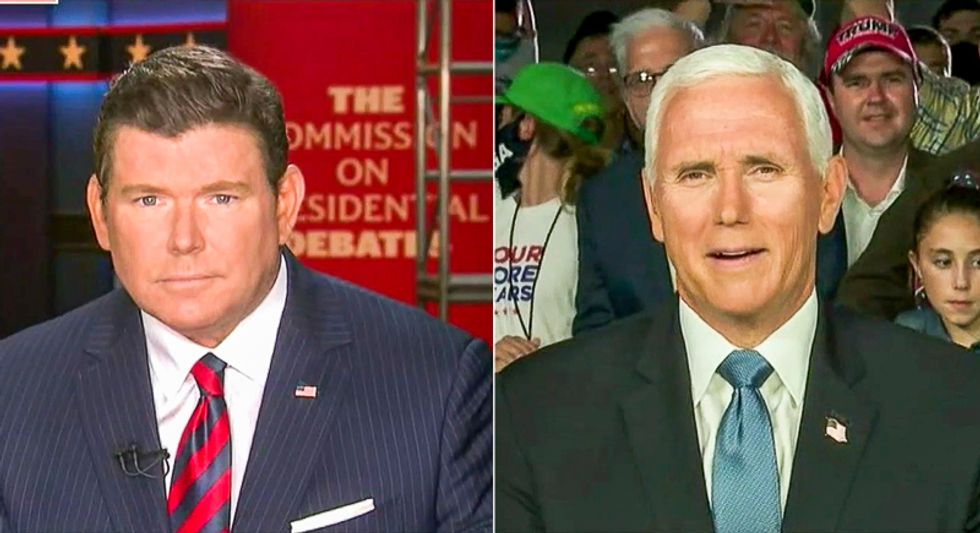 While interviewing Pence ahead of Tuesday night's debate, Baier noted that Democratic candidate Joe Biden intends to hit Trump on a New York Times report, which claims that the president paid no federal income taxes some years and only paid $750 other years.

"It feels like the same-old, same-old," Pence said, shaking his head. "These same issues and allegations came up in 2016."

The vice president went on to insist that Trump had paid millions in state in local taxes but he did not directly deny the claims about the president's federal income tax history.

"The president has dismissed The New York Times report as false," Pence remarked.

"I just want to press you on that," Baier countered. "You know, the president said that it was all fake news -- 'totally fake news,' in his words."

The Fox News host then displayed a tweet from the president which claimed that the documents behind the New York Times report had been obtained by illegal means, suggesting that the allegations are true.

"So which is it?" Baier asked, "a totally fake news story or illegally obtained documents that were real?"

Pence scoffed: "Let me just say, I remember, Bret, you know, this came up four years ago."

"The American people know that when you create the kinds of businesses Donald Trump created, you literally pay tens of millions of dollars in state and local taxes," the vice president asserted. "That speaks for itself."