'Get the hell out!': Donald Trump supporters freak out when protesters show up to Lindsey Graham event 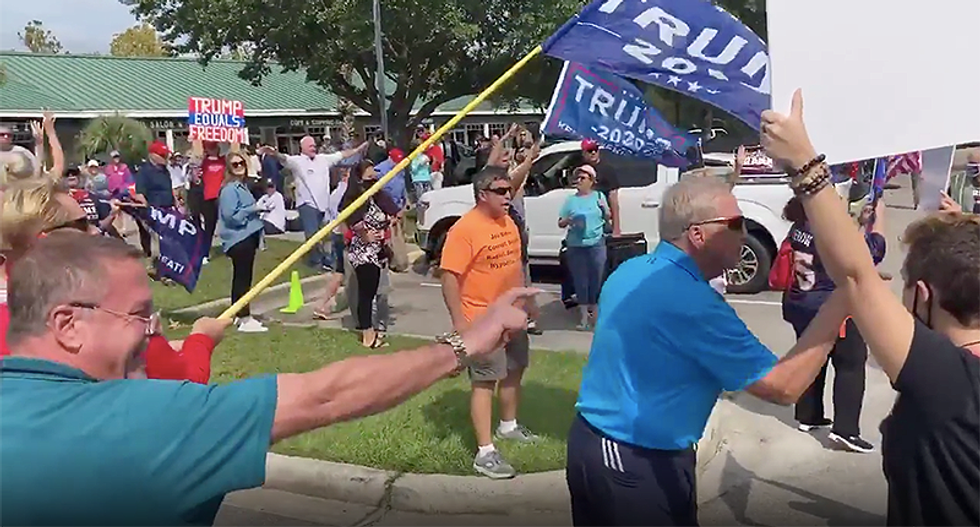 A small group of protesters came to one of Lindsey Graham's latest campaign events, and they were quickly attacked by supporters of President Donald Trump chanting "four more years."

Graham's event seemed to have more support for Trump than for Graham at his own weekend event. It's unknown why the Trump supporters were not chanting for Graham.

"Get the hell out!" one Trump supporter can be heard shouting. He and another older man were seen wagging their fingers.

At least one Graham protester could be seen holding up a sign with a photo of Justice Ruth Bader Ginsburg.

The South Carolina senator is fighting for his political career and many other Republicans are struggling to hold onto their seats. Graham is now being confronted with past comments he made saying that no president, regardless of the party, should make a Supreme Court pick right before his or her election.

"I want you to use my words against me," Graham said in 2016. "If there's a Republican president in 2016 and a vacancy occurs in the last year of the first term, you can say, 'Lindsey Graham said let's let the next president, whoever it might be, make that nomination.'"

Graham then changed his mind after Ginsburg passed away.

"In light of these events, I will support President @realDonaldTrump in any effort to move forward regarding the recent vacancy created by the passing of Justice Ginsburg," Graham tweeted on Saturday.

A whopping 62 percent of Americans have said that they want the next president to choose the replacement justice, according to a new Reuters poll.

Graham is being attacked for being a slimy politician who holds his finger to the wind to see which way he should turn. After blasting President Donald Trump for over a year, Graham became his best friend. He was then seen as a traitor for cozying up to Trump after his longtime friend Sen. John McCain (R-AZ) died, and Trump was mocking and attacking McCain and his memory. South Carolina voters appear to be seeking a senator with some backbone.