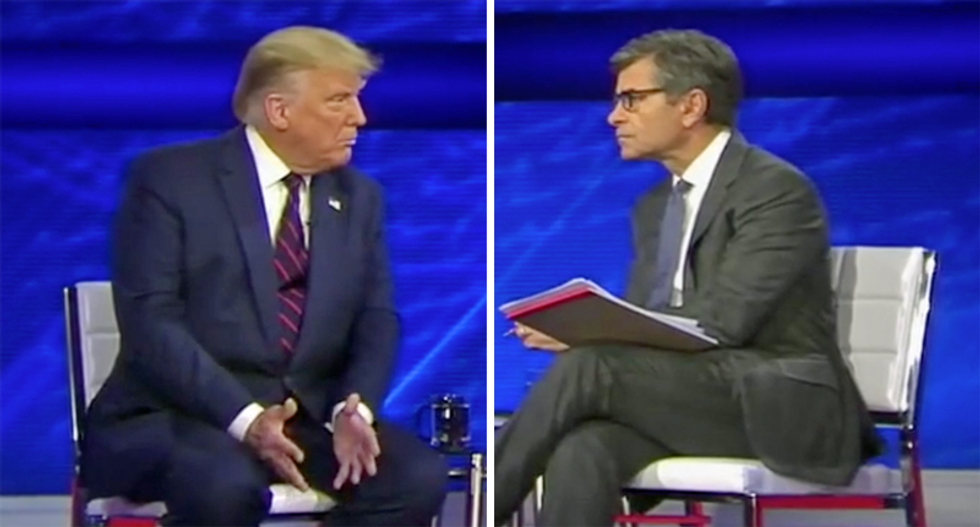 On Tuesday night, President Donald Trump appeared in a rare format for him: He took questions from voters during a ABC News town hall that was focused on policy.

It did not go well. At times, host George Stephanopoulos provided strong pushback to the president's lies, though he let many of them pass without comment. But Trump struggled to discuss policy in a convincing or coherent way, and he was clearly unpracticed at confronting voters who weren't devoted supporters.

And as ever, his astounding combination of ignorance and arrogance shone through.

Here are seven ridiculous moments from the event:

He continued to insist that the virus will "go away," but he couldn't even recall the term "herd immunity" that he was searching for — which is a dangerous and dubious goal anway.

Even though Trump has admitted on tape that he was purposely downplaying the virus, he claimed the opposite on stage and made up a new word. Not only does it contradict his own admission, but anyone paying attention since February would know Trump has consistently downplayed the virus.

He tried to argue that his actions took the virus seriously even if his rhetoric didn't, but in public health crises, clear and truthful public communication is one of the most important factors to get right.

3. He claimed he didn't have enough time to be presidential

It's not clear why it would take any extra time at all, but if he's short on time, he could cut back on tweeting and watching Fox News.

4. He blamed Democrats for not getting a mask mandate

5. Trump said people should "fear" police and suggested that cops who had water poured on them should have gotten retribution

It was a disgusting comment, and Stephanopoulos unfortunately did not challenge it. In the context of calls for restraining police brutality, it's grotesque and counterproductive to suggest cops should be seeking out vengeance for disrespectful actions. It also comes after Trump has repeatedly praised the extrajudicial killing of a suspect in a protest shooting.

Trump said police face hostilities and cites NYC police having water dumped on their heads by people who “had no fe… https://t.co/o67fKLW0sG
— David Nakamura (@David Nakamura)1600219681.0

Trump was unable to acknowledge any serious racism in the United States. Which isn't surprising, because he is racist.

7. "Stocks are owned by everybody"

Trump has sold himself as the president for the forgotten man and woman, and yet he boasts about the success of the stock market. And his claim is just wrong.

"Just over half of Americans own stock, according to 2020 polls," CNN's Daniel Dale pointed out.

Bonus: Trump gets a brutal fact-check