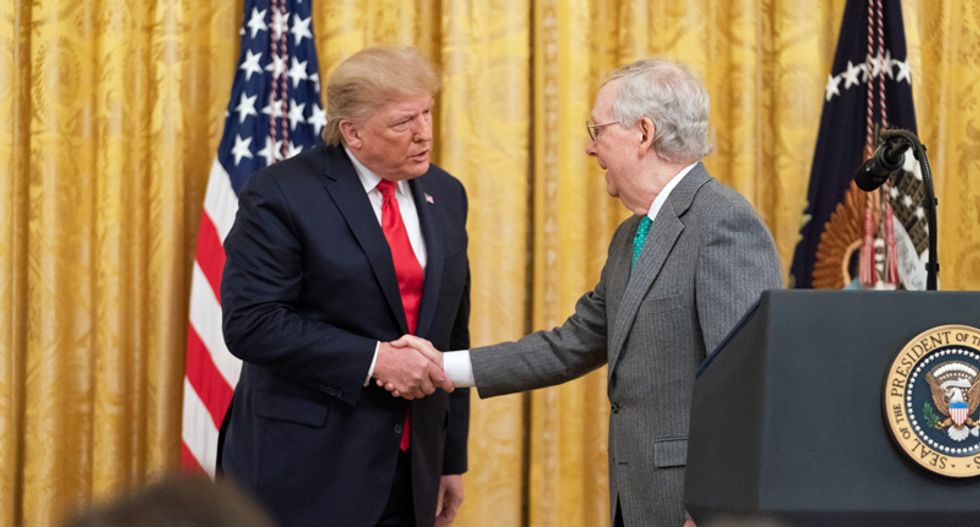 Former fiction writer Richard North Patterson quit working on books to report on what he was witnessing in the country under President Donald Trump's administration.

Writing for The Bulwark, Patterson explained that he has seen the downfall of the U.S. coming for a while and he fears it could reach the dangerous point of being irreversible.

He explained that much of it can be attributed to "a lack of national cohesion and a sense of common citizenship. An economy wherein a prospering stock market disguised growing economic insecurity. Our deteriorating infrastructure and public finances. A widening political polarization. A corrupt campaign finance system which promoted plutocracy. An increasingly politicized judiciary. The burgeoning fundamentalism which infused a major party with theocratic tendencies and contempt for science."

He called out the lies and anger egged on by talk radio and a narcissistic culture which is now playing out with selfish anti-maskers.

The challenge now, he said is to reverse the tide and save a country in free fall. But doing so means confronting eight major problems.

1. The deterioration of social and economic cohesion.

Patterson explained that the divide between Americans has turned the country into siloed groups that can't comprehend anything outside of their tiny world. It isn't merely political ideologies, he cited Milton Friedman's philosophy of "shareholder capitalism" that reduced the idea of American companies being families and turned them into a "Darwinian dogma empowered business to gut unions, reduce benefits, suffocate antitrust law, hamstring environmental regulation, and create yawning disparities of income and wealth."

Meanwhile, the wealthy created the idea of the "free market" which is really just crony capitalism void of any consequences for irresponsible behavior like the 2007-2008 financial crash.

2. The comprehensive degeneration of a major political party.

Patterson thinks that the national collapse of the GOP that was egged on by birtherism and continued with voter-suppression laws has divided the country even further. Once a racist came into the White House, it was only a matter of time that "mindless xenophobia" would begin to take down the opinion of the U.S. globally.

3. The destruction of governmental competence.

If there's one thing Trump has done exceptionally well it's tear down the institutions Founding Fathers built to create a more perfect union.

"Trump came to power as the repudiation of the Republican establishment. But the conservative political class and the new leader soon reached an understanding. . . . Republican politicians and donors who wanted government to do as little as possible for the common good could live happily with a regime that barely knew how to govern at all," wrote George Packer.

It has created a rift between different classes of workers and a significant reduction in upward mobility that manifests into a retreat from intellectualism resulting in a mistrust of things like science and expertise.

"Over decades the Republican base and/or donor class questioned the teaching of evolution in schools; claimed vaccination causes autism (or worse); rejected climate science; and, confronted with a lethal virus, belittled public health experts. With respect to both climate change and the pandemic, right-wing blowhards like Rush Limbaugh, Laura Ingraham, and Sean Hannity derided science as a smokescreen for a liberal attack on personal autonomy," wrote Patterson.

America has suffered the consequences, particularly when it comes to the coronavirus pandemic.

"No matter that, in the lifetime of Americans now children, climate change is likely to trigger mass migration and economic dislocation. Trump and his enablers are not serious people, and their sway suggests we are no longer a serious country capable of surmounting the challenges that threaten our future," Patterson continued.

"Our deficits widen, and for most of the last decade the federal debt has exceeded 100 percent of the nation’s gross domestic product," he continued. "But tax cuts for the wealthy sap revenues needed to combat the pandemic, and threaten to saddle future generations with debilitating levels of debt. In 2017 America’s association of civil engineers estimated that it would take $4.6 trillion to repair our airports, roads, bridges, railways, power grids, and internet which increasingly evoke the developing world. Since then, our government has done nothing."

4. The systemic distortions of democracy.

"Traditionally, gerrymandering was bipartisan," he wrote. "But the GOP has perfected the art of rendering voter preferences in legislative districts near-meaningless by jamming Democratic voters into the fewest districts possible—creating a surplus of Republican legislators."

"In Ohio, Republican House candidates got 51 percent of the vote but three-quarters of the congressional seats. In Pennsylvania, which elected a Democratic president and senator statewide, the GOP took 13 of 18 congressional races," he noted.

The same comment was made by John Oliver on his show Sunday evening, citing the populations of 15 states that have a combined population of 38 million Americans and have 30 total senators. California has 40 million citizens but only has two senators. Washington, D.C. and Puerto Rico have a combined population greater than the size of Wyoming, Montana, and Rhode Island but they don't have any representation in the Senate or House.

He lists out four more, citing the politicization of the federal judiciary, expanding executive power, the "subordination of American sovereignty to an inimical foreign power," and the downfall of bipartisanship.

He called the path to renewal daunting, but it isn't impossible. It all begins with the defeat of Donald Trump, Patterson said.

"Only then can we give ordinary Americans the security that undergirds a stable democracy: quality healthcare; economic and racial justice; universal childcare; decent public schools; affordable higher education; internet access; and fair wages," he said. "For too long, American exceptionalism has been a synonym for smugness and myopia. But if we can return America to what it can be at its best, defying history, we will have truly proven ourselves exceptional."

Read the full piece at The Bulwark.