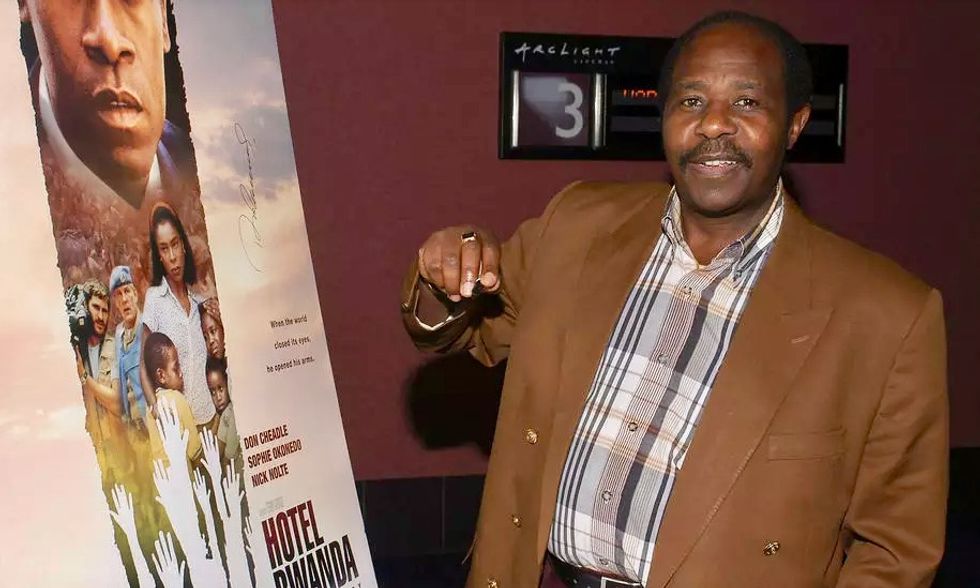 Consultant Paul Rusesabagina, who's story "Hotel Rwanda" is based on, signs the movie's poster for charity prior to the Q & A following the Variety Screening Series - "Hotel Rwanda" at the ArcLight Theater on December 6, 2004 in Hollywood, California. Getty Images/AFP - Stephen Shugerman

Paul Rusesabagina, whose actions during the genocide inspired the Oscar-nominated film "Hotel Rwanda", was charged Monday with terrorism and other serious crimes in his first court appearance in Kigali.

Appearing drained, Rusesabagina appealed to the court to grant him bail to seek medical attention, however the prosecution argued he was a flight risk and a ruling was pushed to Thursday.

Rusesabagina, who had become a high-profile critic of the government and has been living abroad for years, appeared last month in handcuffs and under arrest in Kigali.

His family say he would never have returned home of his own accord, and believe he was kidnapped while in Dubai. Neither Kigali nor any foreign government have given an account of his arrest.

There was a heavy police presence as Rusesabagina, who is credited with saving more than 1,200 Rwandans during the genocide by sheltering them in a hotel, made his first appearance in court.

He is facing 13 charges including terrorism, financing and founding militant groups, murder and arson and conspiracy to involve children in armed groups.

The stony-faced defendant, wearing a face mask, a beige checkered blazer and khaki trousers, refused to enter a guilty or not-guilty plea, with his lawyers arguing that this will be asked of him when the trial begins in substance.

"Like my lawyers have said, I am sick and in need of constant medical care. In the past two weeks, I have been to hospital three times. I request for bail and I guarantee the court that I will not flee from justice," said Rusesabagina.

The 66-year-old is a cancer survivor and suffers from a heart condition and hypertension, both requiring ongoing medication, his family have said previously.

Rusesabagina's heroic tale has grown more complex than the film suggests, with survivors of the slaughter that left 800,000 mostly Tutsis dead accusing him of profiting off their misery.

Supporters of the former manager of the Hotel Mille Collines believe Kigali has worked to tarnish his image due to his strident criticism of the government.

Rusesabagina has lived abroad since 1996 and holds both Belgian citizenship and a US Green Card.

After the genocide, Rusesabagina -- a Hutu -- became increasingly critical of Kagame's Tutsi-dominated government, accusing his ruling party of authoritarianism and anti-Hutu sentiment.

He co-founded an opposition group the Rwandan Movement for Democratic Change (MRCD), which is said to have an armed wing called the National Liberation Front (FLN).

In multiple speeches, Rusesabagina has expressed support for the FLN -- which has carried out armed attacks and is described as a terrorist organization by Rwanda -- but the extent of his involvement in its actions is unclear.

In his address to the court Rusesabagina denied forming the FLN, and said their actions should be blamed on them alone.

He admitted sending some 20,000 euros ($23,000) to FLN commander Callixte Nsabimana -- who is on trial on similar charges -- but denied this was for rebel activities.

"I grew up in the same area as Sankara in Rwanda and my wife was very close to his mother. The money I sent him was meant to provide medication to a child under his care," Rusesabagina said.

Further details of the charges against him will be released during the trial.

Rusesabagina's family has criticised Rwandan authorities for handing him a list of lawyers to choose from, and not giving him access to his own legal team.

"Paul's family reiterates his right to consult with lawyers of his own choosing, particularly given the extraordinary circumstances surrounding his arrest," family spokeswoman Kitty Kurth said in a statement.

Human Rights Watch said last week that Rusesabagina, who was portrayed by American actor Don Cheadle in the 2004 film, was a victim of enforced disappearance.

President Paul Kagame has denied he was kidnapped and suggested he was deceived into returning to the country.

In an op-ed this Wednesday, the Editorial Board for the Washington Examiner declared that the testimony Tuesday from former White House aide Cassidy Hutchinson "ought to ring the death knell for former President Donald Trump’s political career."

"In short, Hutchinson was a conservative Trumpist true believer and a tremendously credible one at that," the Board writes. "She did not overstate things, did not seem to be seeking attention, and was very precise about how and why she knew what she related and about which testimony was firsthand and which was secondhand but able to be corroborated."