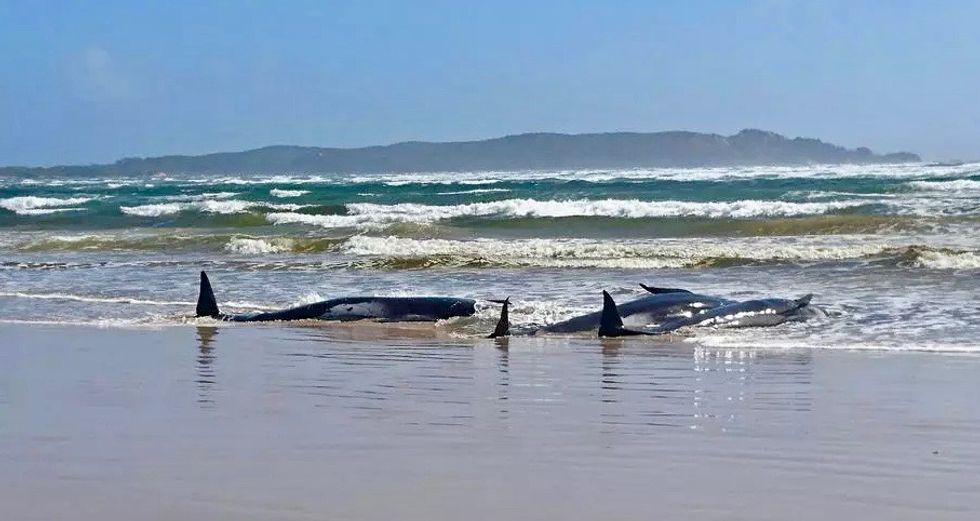 At least twenty-five whales have died and scientists are trying to rescue 250 more that are stranded in a remote bay on the Australian island of Tasmania, officials said Monday.

Tasmania's environment department said the whales had become stuck on a sandbar in Macquarie Harbor, on the island's rugged and sparsely populated west coast.

Nic Deka, who is managing the incident response, said two large pods were stranded on sandbars a few hundred meters apart inside the harbor.

"They are in water but it's very difficult to see how many of those whales are deceased or what condition they're in," he told reporters in the nearby town of Strahan.

They are believed to be pilot whales but the environment department is yet to confirm the species.

Police are on site and marine experts are assessing the situation ahead of plans to launch a rescue mission early Tuesday morning.

"In terms of the tides, when we start making an effort tomorrow it will be with an outgoing tide, so that'll be in our favor, but obviously tides go up and come down so we'll be aiming to make the most of the windows that we have," Deka said.

Authorities may call on a network of local volunteers to assist but have cordoned off the area to the general public.

The latest stranding comes as a humpback whale that was stuck in a tropical river in Australia's north finally returned to the ocean after more than two weeks.

Public broadcaster ABC reported the creature, which spent 17 days in the crocodile-infested waters of Kakadu National Park, has been spotted in open seas off Darwin.

Scientists had been weighing options for guiding the humpback to safety after it became the first known whale to travel up the muddy river, but were relieved when it returned to sea on its own.