Iraq says 'not happy' with 'dangerous' US pullout threat 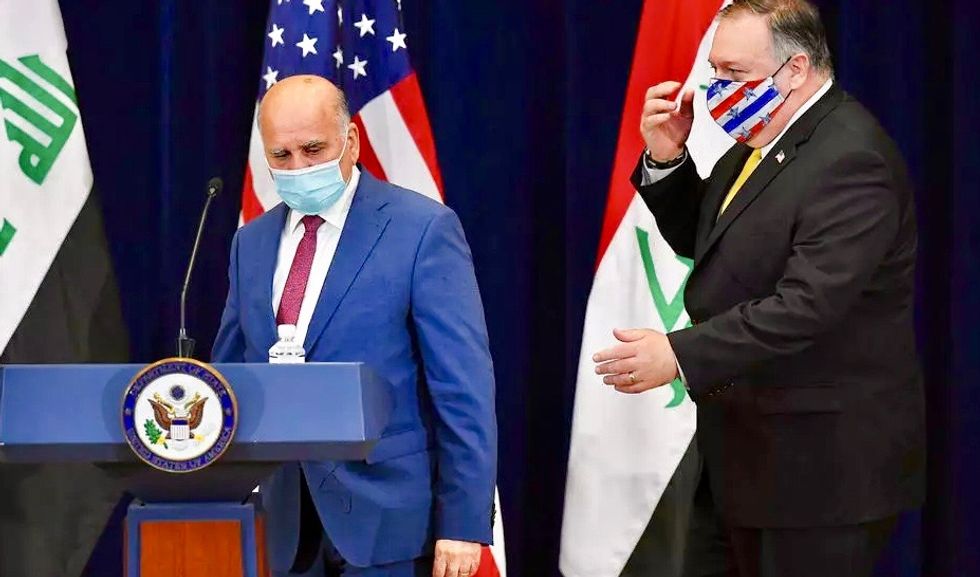 Baghdad is "not happy" with a "dangerous" threat by Washington to pull its troops and diplomats out of Iraq, Foreign Minister Fuad Hussein said Wednesday.

Several political and diplomatic sources have told AFP that US Secretary of State Mike Pompeo issued an ultimatum last week that all US personnel would leave Iraq unless the government puts a stop to a rash of attacks against them.

"A US withdrawal could lead to further pullouts" by members of the US-led coalition fighting holdout jihadists, which would be "dangerous, because the Islamic State group threatens not only Iraq but the whole region," the minister said.

"We hope that the United States will rethink its decision," which at the moment is only "preliminary", Hussein added.

"Some people in Washington make parallels with Benghazi but it's a faulty analysis, just as this is a faulty decision," he said, referring to Libya's second city.

Four US personnel, including the ambassador to Libya, were killed in Benghazi in 2012, when Islamist militants among a crowd of protesters stormed the US consulate.

Between October 2019 and July this year in Iraq, around 40 rocket attacks have targeted the US embassy or bases housing US troops.

Since Prime Minister Mustafa al-Kadhemi was received in the White House amid great fanfare in August, the frequency of such attacks has increased significantly.

In the space of just two months, another 40 attacks have taken place, targeting not only the embassy and military bases, but also the supply convoys of Iraqi contractors for Washington and its allies.

"Attacks on foreign embassies are attacks on the government, which has responsibility for protecting them," the Iraqi minister said.

Recent attacks have mostly been claimed by little known factions among the array of Shiite armed groups equipped and trained by neighbouring Iran during the war against the Sunni extremists of IS.

The armed groups have been locked in a tug-of-war with Kadhemi, who is seen as more pro-American than some of his predecessors.

Underlining the risks, a rocket attack targeting Baghdad airport hit a nearby home on Monday evening, killing five children and two women from the same family.

The US still has hundreds of diplomats in its mission in the high-security Green Zone in Baghdad and around 3,000 troops based in three bases across the country.

NEW YORK — Grammy-winning Bronx native Cardi B pledged Wednesday to cover the funeral costs of all 17 victims of a high-rise building fire in her home borough. The hip-hop star’s commitment includes the expenses to return some of the dead for burial in their native Gambia, and Cardi B expressed her continuing support for the families still reeling from the city’s deadliest fire in more than 30 years. “I cannot begin to imagine the pain and anguish that the families of the victims are experiencing, but I hope that not having to worry about the costs associated with burying their loved ones will...

'This is not a made-up story': Fox Business host battles Lara Trump over 'bad blood' with Ron DeSantis

Varney kicked off his interview with Trump on Wednesday by asking about reports of a possible feud between her father-in-law and the Florida governor.

Here's why prosecutors think Oath Keepers returned to the scene of the crime on Jan. 7

BusinessInsider reported Wednesday that a group of Oath Keepers returned to the U.S. Capitol on Jan. 7 after the violent attack that left 140 law enforcement officers injured.

Prosecutors recently filed documents alleging that Edward Vallejo and allies went to the Capitol to "probe their defense line." He and the men had a kind of Capitol patrol around the building. Vallejo specifically told his group chat, "We'll be back to 6am to do it again. We got food for 30 days."