Is bellwether Ohio slipping out of play for Trump? 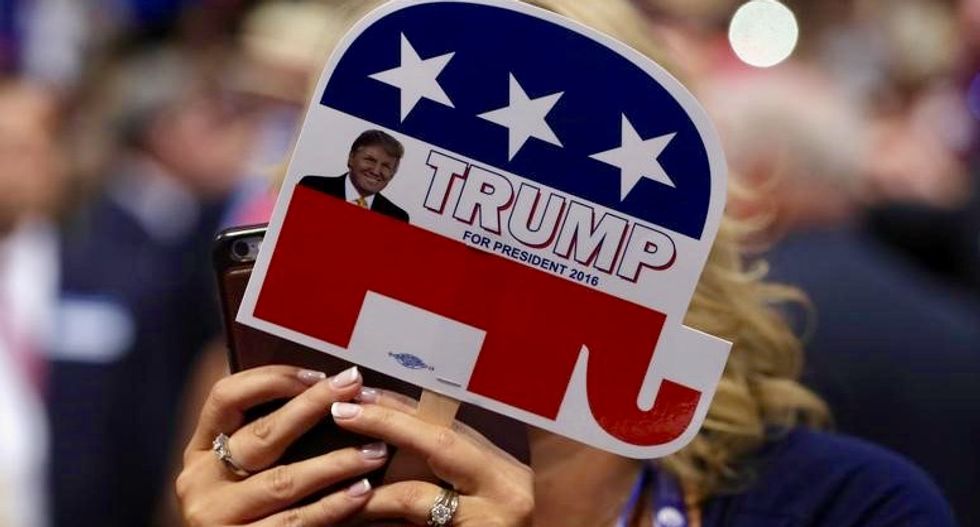 A delegate takes a photograph with her phone as she holds a small sign supporting Republican U.S. presidential nominee Donald Trump during the final day of the Republican National Convention in Cleveland, Ohio, U.S. July 21, 2016. REUTERS/Brian Snyder

Four years after carrying bellwether Ohio and winning the US presidency, Donald Trump again needs the support of disenchanted Democrats in the critical state if he is to earn a second White House term.

Ohio has been a political prize for generations of candidates wooing the state's diverse voting demographic, which closely mirrors the nation and has offered a reliable quadrennial gauge of American sentiment.

Trump has visited twice in six weeks. And while Ohio might have been low on Biden's priority of states that give him a path to electoral victory on November 3, it nevertheless remains a tantalizing opportunity.

Biden has launched campaign TV ads in Ohio, and he and Trump converge on Cleveland Tuesday for their first presidential debate.

Trump's pledge to bring manufacturing jobs back -- a ploy that helped him flip several Rust Belt states in 2016 -- has largely failed to materialize, and he finds himself in a nail-biter with Biden in Ohio.

"At this point in time, I really don't know who I'm going to vote for," Joe Rosky, a retired firefighter and lifelong Democrat who backed Trump in the last presidential election, told AFP.

"He's making claims that he can't possibly back up," Rosky, drinking coffee at a diner near Youngstown, said of Trump's insistence that he has reinvigorated economically depressed corners of the state.

Job flight in and around Youngstown -- a historically blue-collar, Democratic region -- began in the 1970s with the closure of massive steel mills, and it hasn't stopped.

Thousands of Democrats in the Youngstown area flipped to Trump, helping him win Ohio by eight percentage points in 2016.

"Donald Trump tapped into people's emotion of being frustrated about their lot in life," said David Betras, a former Democratic Party chairman in Youngstown's Mahoning County.

"When you're thirsty, you'll drink dirty water, because at least it's water."

In an interview Betras expressed bitterness over his party's 2016 failure to speak directly to the "outrage" of working class Ohioans who lost their jobs to Mexico and China.

Biden has run a strong campaign and courted Ohio voters with his economic revitalization plan, Betras said. But it might be too late in the Buckeye State, where many crossover voters continue to support Trump.

"I hope that great blue wall stands up, but I don't think he's going to win Ohio," he said of Biden.

Ohio is at the nation's heart. It has produced seven US presidents and boasts a unique regional diversity as well as mixes of urban, suburban and rural populations.

It has voted for the presidential winner in every election since 1960, and no Republican has ever won the White House without carrying Ohio.

Like Betras, Cohen sees signs of a tilt rightward, including the GOP's strong performance in the 2018 midterms in Ohio, where Republicans won nearly all statewide offices despite a nationwide election that trended strongly Democratic.

"That tidal wave stopped at the Ohio border," Cohen said.

Cohen predicts Ohio is likely to go for Trump even though Biden narrowly leads in state polls and is favored to win the presidency.

Some anti-Trump Ohio Republicans are working actively against him.

"Our goal is quite simple: We're trying to reach reasonable Republicans throughout the state and ask them to put country over party," said lifelong Republican Phil Heimlich, a former prosecutor and county commissioner who co-founded Operation Grant, a collection of Ohio conservatives backing Biden.

"The good news is Ohio is in play, and we don't have to change that many hearts and minds to win this," he told AFP in Youngstown.

Democrat Tony Hickson, an African-American on disability, was on a similar conversion mission with people he knows turned to Trump.

Hickson, 59, seeks to "get them back on the Democratic side," perhaps by convincing them of the president's bungled response to the pandemic, he said as he picked up Biden yard signs at the party's Youngstown office.

Ohio officials have said the effects of pandemic lockdowns could reverberate for years.

But some Trump supporters remain optimistic.

As for manufacturing jobs, "they're coming back," insisted retired electrician Tim Fresch before entering Monday's Trump rally near Toledo.