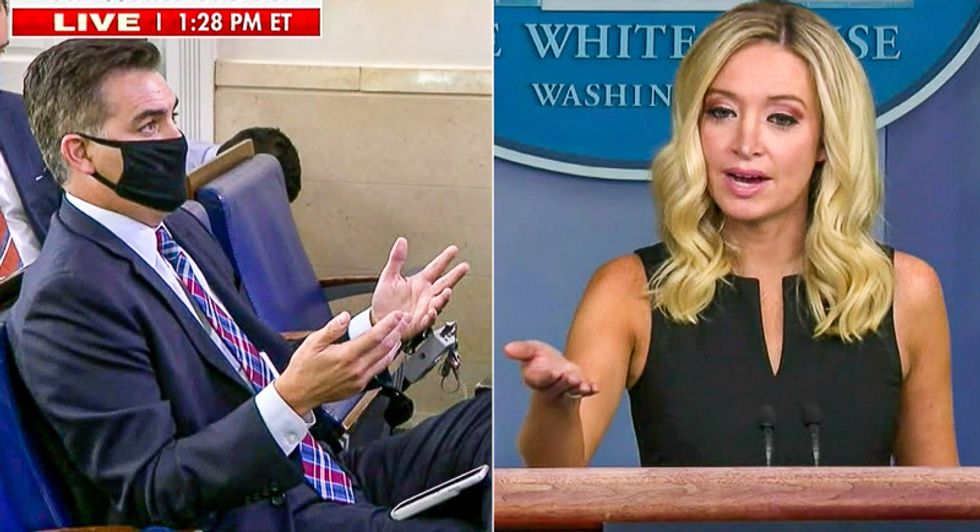 White House Press Secretary Kayleigh McEnany on Tuesday defended President Donald Trump after he said that COVID-19 affects "virtually nobody" even though the death toll has passed 200,000 people in the United States.

At a White House press briefing, McEnany was asked about the rising death toll. In response, she pointed to projections that 2 million people could have died if the administration took no action against the pandemic.

"We grieve when even one life is lost," she said. "But the fact that we have come nowhere near that number is a testament to this president taking immediate action."

At that point, CNN correspondent Jim Acosta noted that Trump had recently told his supporters that COVID-19 affects "virtually nobody," referring to young people.

"Shouldn't the president be telling people the truth about this virus at his rallies?" Acosta asked.

"The president is telling people the truth," the press secretary insisted.

"Jim, but you're again taking the president out of context," McEnany complained. "He was referring to young people."

"You are taking it out of context," McEnany repeated, "because you're making an assertion that he's not giving critical information when in fact he is."

"Young people can contract the coronavirus and then spread it to older people," Acosta replied. "We've known this since the very beginning and for the president of the United States at 200,000 deaths to go out to his rallies and say something like it virtually affects nobody and in some states it's not affecting young people, that is glossing over the fact and really diminishing the fact that young people can catch this virus and spread it to older people."